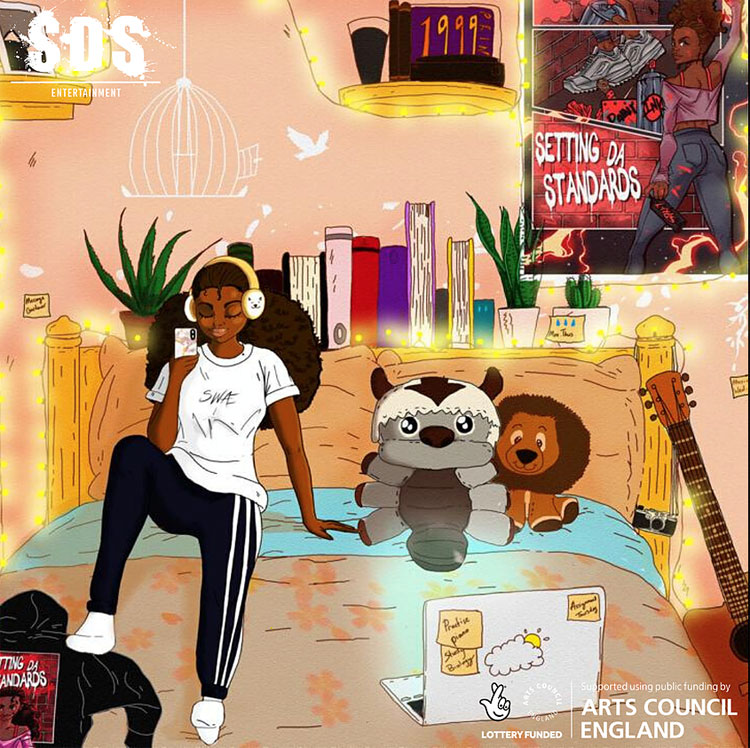 On June 1st , SDS Entertainment (Setting Da Standards) launched an online platform in aid of the Croydon Hub Project. An online directory of budding talent in the Croydon area. Funded through the The Arts Council’s National Lottery Project , the new website will be a creative hub designed to serve Croydon’s local talent and redefine the borough’s perception. Functioning as a forum for artists to do interviews, perform live sessions and slowly cultivate their own fanbases.

The website also operates as an educational platform for young artists to start acquiring awareness and a familiarity with the business and contractual aspects of the music industry. Knowledge and information that for many upstarts has many barriers to access. SDS Entertainment is a community arts company based in Croydon. Founded in 2018 by Makeda Bennett-Amparbeng and Jade Reid. Makeda works at British Underground LTD . A music agency producing international showcases and strategic development projects like Atlanta, Georgia’s A3C Festival.

Also known for their work with notable UK talent such as Shakka and Knucks. Meanwhile Jade is an artist manager looking after Deanna Chase . A rising singer/songwriter who has graced stages alongside artists like Yxng Bane and Ms Banks. The origins of SDS Entertainment was birthed by Makeda’s involvement in the 2017 abolishment of Form 696. Controversial and racially-motivated, the risk assessment document issued by The Metropolitan Police had a hugely negative impact on Croydon’s art scene.

A grassroots group predominantly made up of individuals from black and brown communities. Witnessing first-hand the effects this was having, Makeda sought to curate an initiative devoted to supporting young creatives by rehabilitating the Croydon’s arts community via live performances, workshops and exhibitions. A safe space for local talent to express themselves through the mediums of rapping, singing, poetry and comedy. Her perseverance led to the formation of SDS Hub Nights at The Front Room. A monthly event at one of the only music venues left in the borough. The success of this event series opened the door for SDS to organise an event channeling a more intimate/unplugged atmosphere; Frith Road
Session at the legendary Reggaemasters record shop.

They played a pivotal role during The ENDS Festival last year. Connecting the organisers with a collective of artists to be considered on their ‘Future’ stage. Dedicated to homegrown talent in the Croydon borough. This led to the appointment of Marc Jones being added to the festival bill, a once in a lifetime opportunity for a young artist. Since his appearance at the festival, Marc Jones ’s trajectory has rapidly progressed. Amassing over 3 million streams on Spotify and garnering support from BBC 1xtra , GRM Daily , Link Up TV and Mixtape Madness .

SDS Entertainment works closely with Mykaell Riley , director of the Black Music Research Unit at the University of Westminster. He got his start in the music industry as a founding member of Birmingham’s pioneering roots reggae band Steel Pulse . He would go on to produce tracks for the likes of Soul II Soul , Sinead O’Connor , Mark Morrison , Gabrielle and write music for The Lenny Henry Show and The MOBO Awards .

SDS Entertainment also works in partnership with Wozzy Brewster OBE , founder of The Midi Music Company . Recently inducted into the Music Week’s Women in Music Roll of Honour, Brewster has been a pivotal figure in the development of many artist’s careers like The Noisettes, Kate Tempest, Katy B and Yussef Dayes.

Over the course of their two year existence, SDS Entertainment has secured funding from The Arts Council England and Croydon’s Cultural Partnership Fund. Additionally they’ve been featured on BBC Radio London and BBC Radio 5.

It doesn’t stop here for SDS as they plan to launch an artist development programme in 2020 to facilitate the ongoing penetration and mainstream breakthrough of UK acts.

To find out more about SDS Entertainment, go to: