22-year-old London-based artist, Leyla Diamondi, has been supported by BBC Radio London, BBC Introducing, UK Health Radio, LGR and multiple other radio stations across the country. She featured in the BBC 6MUSIC festival fringe in March 2020 and sold out her single release party for new single ‘Letting Go (Bad Habits)’ at the London Kindred 4th November 2021. Leyla’s single ‘Down for You’ has also just been added to the new and official Hotel Chocolat in-store playlist.

Proud of her half-Greek and half-Turkish heritage, Leyla represents the good that can happen when individuals choose unity instead of centuries of racial & cultural division. Also being named after her powerful grandmother, ‘Leyla,’ who fought her whole life for women’s rights and equality, Diamondi wishes to continue the path her grandmother started.

Her latest release Letting Go (Bad Habits) is a story about letting go of the habits that no longer positively serve you like they once did, and replacing them with new and healthier ones.

When asked about the concept and inspiration behind the video Leyla explains:

For the music video, I wanted it to be visually interesting and engaging but also simple enough to keep it more about the music – to let it speak for itself. In such a complicated time, with everyone trying to say something, I wanted to stop and bring it back to what really matters the most: the music. I believe the resulting music video creation by Stefan Hanegraaf and myself achieved just that. 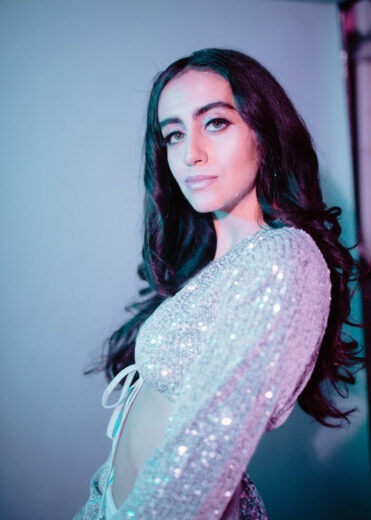 As for what I was wearing, I wanted to bring in more of my feminine side because that’s how I always feel comfortable dressing. Growing through the school system, I was criticised for being “attention seeking” and “asking for it” when in reality, I was dressing in mini-skirts and crop tops from day one; it’s just how I feel comfortable. So, in this music video, even though it keeps the music at the centre, me feeling comfortable to dress as I please and freely express myself visually has been such a wonderful thing.

“If you want to cover yourself, you can, and if you want to show skin, you can… it’s your choice. Don’t let anyone’s opinions on you dictate your path.”

Expanding further on the creative process, Leyla goes on to add:

Letting Go (Bad Habits) is about letting go of the habits that no longer positively serve you like they once did, and replacing them with new and healthier ones. A lot of people are hard on themselves, and if I’m honest, as long as you try your best then that’s enough. If you can improve by just 1% everyday I think that is something to celebrate and be proud of.

I want to bring up stereotypically ‘negative’ emotions such as anger and numbness because they have a tainted image. When you are in a bad environment or going through hardship, emotions like anger can help you see what you need to heal, and emotions like numbness can help you carry on when you aren’t ready to deal with the pain you have experienced. ‘Negative’ emotions aren’t bad or wrong; all emotions have a place. Allowing myself to have my ‘bad habits’ with no self-judgement has allowed me to create a better, more secure life for myself where I now feel safe enough to let go of what I no longer need.

So, yeah… I wrote this song for me to heal, to help, and I hope you can relate to it too.

Anecdote of the creative process: Usually, when I write music, the structure falls into place on its own. I don’t ever try to artificially alter anything and keep it organic. However, for this track, it took a month of surgical changes, and I made draft after draft trying to find a flow that worked. We ended up removing the whole pre-chorus and creating new chords, which allowed us to create a flow of drums that then tied the whole track together.

The original chorus became what is now the intro and the catchy ‘bad habits’ hook was then penned by myself. The outro of the track was actually improvised. When I was recording ad libs in the studio, I asked the vocal engineer to keep going and I improvised the melody. Then, I created the harmonies and in 5 minutes the outro was fully recorded. The outro was inspired by Justin Timberlake; I was listening to his music on the way to the studio and I guess it translated into the track as a result.