Fresh off her recent link up with Backroad Gee on high quality two-stepper and summer anthem ‘Rockabye’ and tipped by the likes of The Fader and Clash, Lost Girl delivers another perfect slice of Garage with the release of the emotive single ‘Forever’.

Her debut single ‘I Won’t Give Up’ recently hit 1 million streams and ‘Forever’ looks set to follow as the young artist sings with real passion and feeling about a past relationship, “I thought you would be my forever”. Supported by a minor key instrumental, and a propulsive drum sound ‘Forever’ maintains that signature garage club vibe that Lost Girl has mastered.

The young talent from Reading also delivers her dazzling mix of tracks to make her EP debut with ‘EST 1999’. This EP started with her journey began back in 2020 and includes the sparkling pieces of work that have come along the way mixed with some new and innovative styles too.

A prodigy of the Covid world, meant she experienced a delay to the live music scene but that has all changed this summer with the 22-year-old performing at festivals such as Reading, Leeds and Wireless where she entertained many large crowds that did not exist when we last had live shows. Lost Girl also very recently supported Wes Nelson at his first headline show in London. 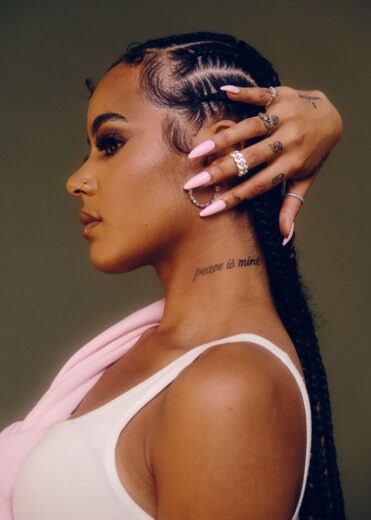 Her debut single released last year ‘I Won’t Give Up’ recently hit 1 million streams. Lost Girl proved herself an onscreen natural making her TV Debut on Celebrity ‘Goggle Box’ alongside her manager and mentor Tinie Tempah. With support across the board from the likes of Clash, Notion, GRM Daily, Mixtape Madness, RWD, Trench, The Fader the Reading born artist has garnered an impressive 6.5M global streams and 4M UK streams.

Recently surpassing a million Spotify streams on her debut single ‘I Won’t Give Up’, this track needs no introduction since its release last year. Demonstrating her Garage-esque flair from track number 1, she instantly had her fan base wanting more. Later releasing ‘Lazy Love’ alongside the female Drill Queen Ivorian Doll, this track was a stellar way to show her collaboration ability which has also taken place on the EP.

The team ups did not stop there, as her and Backroad Gee combined to gift us with the summer two-stepper ‘Rockabye’. All these creative outbursts were matched with top visuals which helped to illustrate the likeable vibe that Lost Girl possesses. Just before the liberating of ‘EST 1999’, the fanbase she has built received the final single ‘Forever’ which put Lost Girl’s emotive side on display.

The undiscovered tracks on the EP include ‘Give It To Me’ which shows Lost Girls versatility as she branches onto a modern R&B style track with her very own British stamp. Using a more concealed version of her voice she delicately caresses the melodically rich and spacious beat.

Diversifying further, she has left the powerful slow rhythms to the EP itself. ‘Arizona’ has a slow 90s type hip hop beat. Less push on the singing and more on her intelligent lyrics and pleasant melodic flows. Showing she can do more than Garage, this track is composed beautifully with talent throbbing guitar solos, all spot on to the vibe she created in the track.

All of her work since arriving in style on the scene has led to this release, boasting over 5 million all time streams on Spotify alone, this is just the beginning. This moment marks a monumental period for Lost Girl with her first ever EP. Coming a long way from when Tinie Tempah messaged her on Instagram, Lost Girl has transformed into the full package and there is no looking back.

‘Est 1999’ is available now via all major platforms.