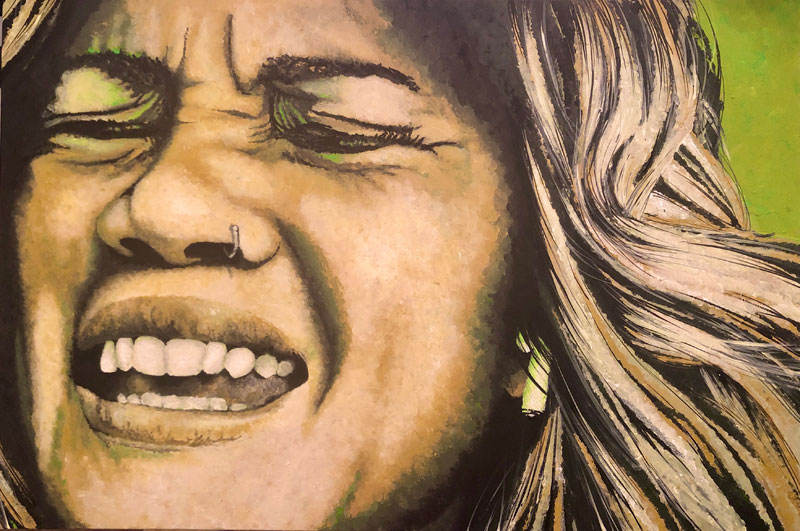 Courtney Raney is a modern impressionist painter. Born in Iowa and raised in Southern California, she now lives in Los Angeles. As a youngster, Courtney found her way into painting through her father – who is also an artist. She still remembers painting on his studio floor as a child, watching her dad create and wondering if she would ever be that talented. Courtney studied art in University where she graduated with a Bachelor’s in Fine Arts. While she learned a lot from art school, she recognized that creativity is the hardest skill to develop; it is something that cannot really be taught.

In her journey as an artist, Courtney tried sculpture and other mediums but she never felt a sense of success with other forms of art. When she tried painting, she realized that this form of art was something she did well. That was fifteen years ago and she continues to focus on it and enjoy painting today. Over the years her art has evolved. She used to describe her work as pop art and expressionist, but now Courtney finds that she is exploring impressionism in many forms and enjoys watching it unfold. In the past, she created works that had a graphic-like quality – pieces with clean lines and edges. Now she is exploring realism, blending, and colour theory more than ever. Courtney has always loved painting portraits, and that has certainly stuck with her, but her style and subjects have recently changed. She uses closely cropped images of her subject’s faces to confront the viewer and make them feel the emotion she is trying to convey. The use of colour in her work is now more deliberate and meaningful, whereas it used to be purely aesthetic. Each painting will have a colour theme meant to express an emotion or an idea.

Recently Courtney has been inspired by writings on Feminism, Post-Structuralism, Post-Modernism, and current social culture. She believes it is important to talk about what is currently going on in this complex time we are living, and wants to make something of it. When Courtney learns something new, she loves to find a way to put that knowledge into her collection. She also enjoys exploring current artists with whom she has something in common. For Courtney, she believes that she can always grow as an artist when she looks outside of her own comfort zone and explores ideas beyond those in her head.

Courtney always used to wish that she lived during an era of art that spoke to her, such as the early 20th Century Modern Art Movement. Her favourite artists from that time include Henri Matisse, Pablo Picasso, and Frida Kahlo for their innovation, creative thinking, and pot-stirring attitudes. A quote of Matisse’s really helped Courtney step out of that mindset and appreciate where she is now in the world:

“…for whether we want to or not, we belong to our time and we share in its opinions, its feelings, even its delusions.”

For Courtney, she recognized that no era is perfect – even in retrospect – and as such, everyone should live in the current moment. In realizing that she is exactly where and when she is meant to be, Courtney has been able to embrace the kind of art she is supposed to make. To be a post-structuralist artist is incredibly exciting for Courtney. She loves having the opportunity to paint about things like feminism, racial injustices, the LGBTQ community, equal rights, and cultures outside the current canon of “fine art” – among other marginalized groups – and give them a voice, a name, and a face. For Courtney it is an honour to be able to do that right now – in this time.

Courtney’s work has been noticed worldwide; she has exhibited in galleries in Los Angeles, California and Zürich, Switzerland. Courtney found that she has been re-inspired by her father as of late, who is now exclusively a wood worker, making incredible decorative furniture. Recently he shared with Courtney that he thought she was very talented. As a man of few words, it was a huge acknowledgment for her. Painting is such an important part of her life now that it has become therapeutic. Whenever she has not had the opportunity to paint for a while, she knows something is missing.