Inspired by His Own Superheroes: Meet Black-Centric Artist Donnie Evans 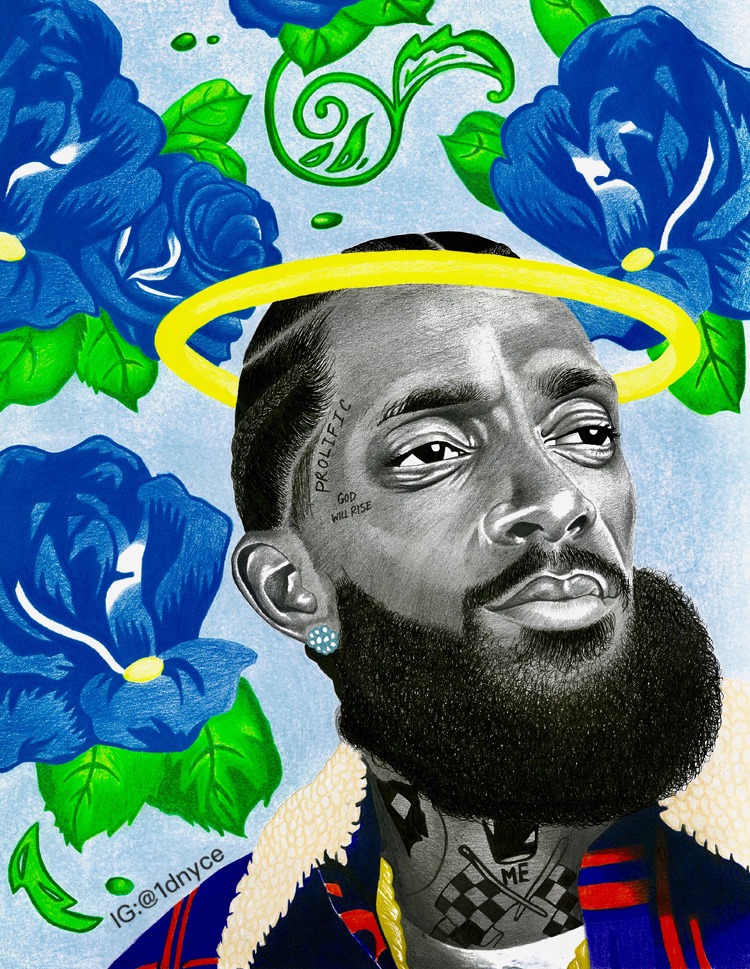 Donnie Evans was born and raised in Durham, North Carolina. He appreciates the various forms of art and the talents of other artists, which is why his dream is to open up art studios in various locations to celebrate and recognize all forms of art. Prior to COVID, Donnie was touring, selling and displaying his work. While only focusing on art for a short period of time, his talents were being quickly noticed in the arts community. Donnie was featured on a billboard in Baltimore Maryland and his work has been shown in various articles. He has had the opportunity to work for Snoop Dogg designing t-shirts and phone cases and numerous celebrities have shared his art. As well his work was showcased on VH1’s website.

In looking back, Donnie cannot remember how he initially got into art, but he does remember loving to draw ever since he was little. His first memory of drawing was sketching a bald eagle in his third grade art class. His teacher told me him that he was too advanced for her class and she suggested he take classes at the Durham School of Arts. Unfortunately Donnie was not able to take classes at the school; nonetheless, he continued to draw.

In middle school he delved into graffiti, selling index cards with the names of sports teams to his peers. He also used to draw Dragon Ball-Z characters. Looking back at family photographs, he kept his sketchbook close by all the way through middle school. After high school Donnie attended The Art Institute to pursue a degree in graphic design. By the end of the second semester, he knew school was not where he wanted to be. Donnie wanted to travel and showcase his work all over the country; all over the world. About four years ago, he pursued his dream and began sharing his work through shows across the United States, at which point he fell in love with his craft all over again.

Donnie’s work is very powerful and Black-centric. The bulk of his work has a street style portrait feel. Using graphite pencil, he creates the faces of inspirational figures in the Black and Latina communities. He juxtaposes these figures with vibrant and colourful backgrounds using Prisma colour pencils and pens. People often think that he paints the backgrounds because of the way he blends the colours, but his work is all pencil and pen. 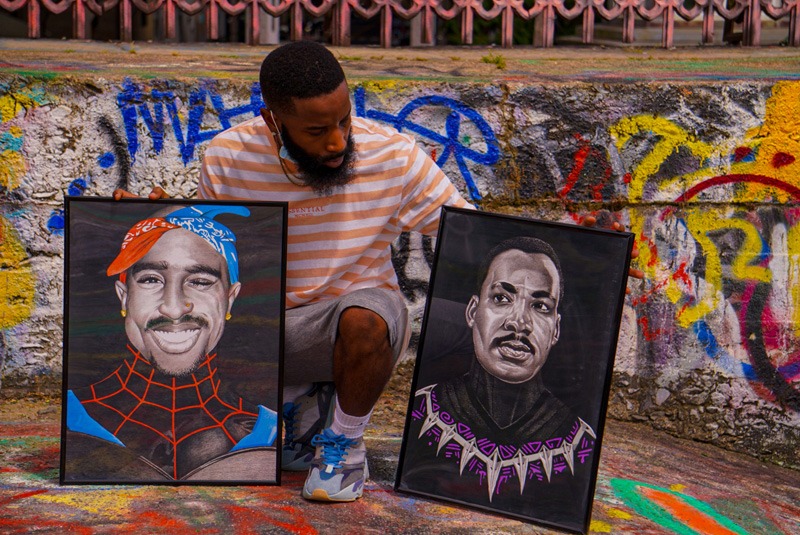 Recently, he has branched out into acrylic painting, to try something different and to spark new creativity. This has kept him from becoming stagnant during the pandemic. Donnie is starting to love painting because of the challenge it provides him, especially the mixing of colours, in part because the paint dries so quickly. He also fell in love with photography once he started traveling. Initially Donnie was using photography to record memories of where he had been. It was not until he started getting booked for shoots that he started to take his photography more seriously. As he is still in the early stages of his journey as a painter and a photographer, Donnie does not have a defined style – at least not one that he can describe as of yet.

The Black community, the Black experience, and Black people heavily influence his art. When he is planning a portrait for a show, he selects Black people from that city or state to showcase because he wants the people who come to his show to see Black people in a positive, prolific, and inspiring light. For Donnie, he wants his audience to see his art and feel uplifted. When he is drawing a portrait for himself, such as his Black Superheroes series, he focusses on all the powerful, Black people who inspire him. In this series specifically, he paired his Black superheroes with all of his favourite comic book superheroes. By dressing these figures: Malcolm X, Martin Luther King Jr., Kobe Bryant, Barrack Obama, and Tupac, in the uniforms of superheroes he makes it obvious that no matter the negative press, the critiques, or the negative commentary, these men were, and continue to be, superheroes.

The pandemic showed Donnie that he was creating art for the wrong reasons. By that Donnie shares that “he was chasing fame and money and that is not what he is about”. Now when he creates art it gives him a different feeling. He believes that his art is better now that he has a different mindset, one which he is ready to share with the world.

Donnie’s inspiring and empowering Black superhero series, along with his other works can be seen on his Instagram site.