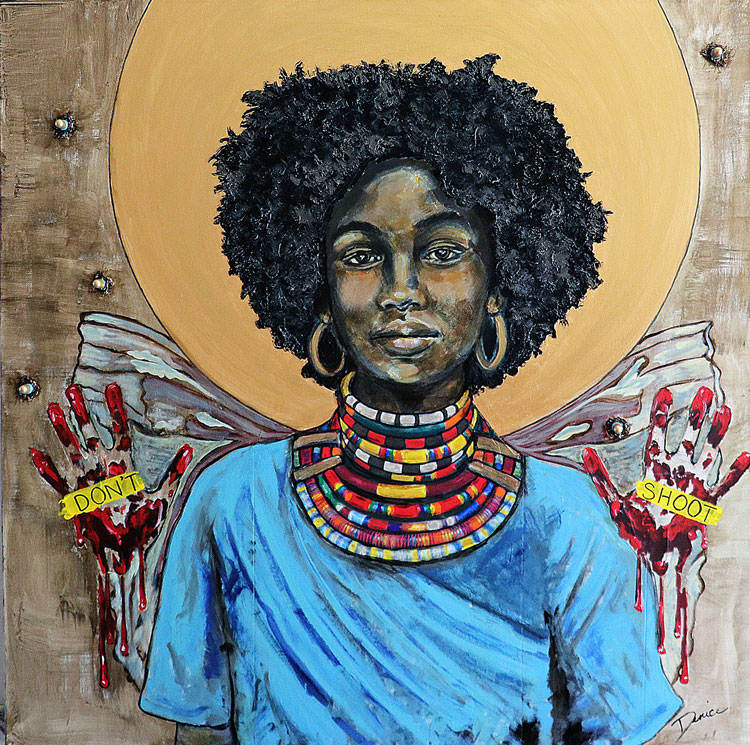 Fine artist Denice Taylor Rinks is a mixed media artist. She was born in San Francisco, California and lived in many states across America while growing up. She ended up settling in a small town just outside of Nashville, Tennessee, where she now resides. Denice received her Bachelors of Fine Arts degree in painting with a minor in photography, as a non-traditional student. She attended college right out of high school. After studying for three years, Denice took a break to find herself; she found her mate and gave birth to her son. When, her son was old enough to start school, she returned to university to finish her degree. Before returning to university, Denice worked for a corporate ad agency as a graphic designer for nine years and later left to become a freelance artist, a career which has spanned 25 years. During this time she formed her own business, Aesthetical Climate Studio®, which continues today.

Denice has always known that she wanted to be an artist, as she has always been driven to create. She was fortunate that her mom was constantly supportive of her passion and has always encouraged Denice’s love of the arts. At the early age of one she remembers drawing circles over and over wanting to make one that was perfectly round. By three she would sit for hours drawing everything around her, loving words, images, shapes and colour. Denice received her first paint set at age four unknowing that later in life she would be moved by this medium the most.

By age five she was chosen to attend a gifted-talent program at the local college. Denice carried this love of the arts over to her university years, where she used an upstairs storage room as her studio. It was in this studio where Denice would frantically start laying out colour onto blank canvases to get rid of the white staring back at her. In this tiny room she created her “Guardian Angel” piece, a breakthrough painting. While all of her previous works suggested a developing style “Guardian Angel” was the starting point for her new journey, one where she was overrun with the need to paint. After painting 32 pieces in less than three months, Denice needed to take a break. Her professors were stunned to say the least. Realizing how driven she was her professors were the first to call her a “visionary artist”. The love of the arts has been instilled in her son, who is a video and film artist. Denice frequently collaborates with him on projects. As one of her biggest inspirations, he is often represented in many of her current portrait paintings, as well as her photography and digital art series. 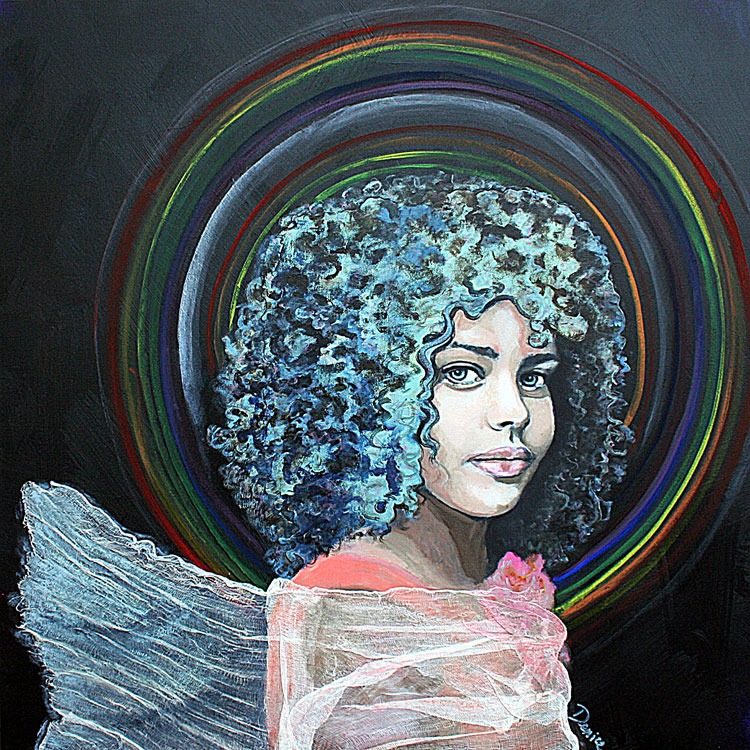 Initially Denice’s style of work began as a combination of Expressionism and Modern Contemporary Abstract. Each painting developed from a spiritual aspect in which her brushwork was uncontrolled and bordered Automatism. Over time Denice has become more of a mixed media artist and with the shift in medium there has also been a shift in her style, to the point where her work is now more Representational and Expressionistic. Denice uses colour theory, texture, relief and balance to create her compositions. Denice describes her work as being “climate change aware” as she incorporates recycled and reused materials that would otherwise end up in a landfill. She also uses a variety of acrylic paints, inks, dry and wet media along with pasted papers and scraps to create layers and a sculpted feel to her work. The use of these found objects in combination with the various media allows Denice a way in which to best express the unique meaning and purpose of each painting. Sometimes the piece remains abstract, where the colour and brushwork is enough to tell the story. Denice writes her interpretation of each piece as a narrative. Although it may explain the intention of the painting, she still enjoys knowing how others view and relate to the work since art is subjective and based on each individual’s experiences.

Denice’s artwork is created to bring awareness to the needs of humanity. Her sole purpose is to spread love and kindness in a time where people are too often made to feel hopeless, helpless and disregarded. This focus comes from Denice being a human rights art activist, where she wants to give voice and raise awareness about issues of importance. She is currently working on a portrait series about restoration, awareness and social justice. Her mixed media paintings include subject matter pertaining to human rights, experiences growing up as a minority, inclusivity and equality among other issues. It is how she relates to life and translates her experiences through colour, shape, words and media. Denice finds herself within each painting. The desire and drive to create has given her a purpose. The artist in her is what makes Denice authentic to herself, in her ongoing focus to be relevant and to radiate acceptance and understanding.

Through her site Aesthetical Climate Studio®, Denice is developing an environment for creative expression and learning, where life experiences are shared in order to promote understanding and acceptance. She hopes to bring inspiration to others based on her life experiences. Denice hopes that her artwork teaches, inspires change and value, and encourages others to take action. Her ultimate goal is to give voice to those who are quieted by fear, environment or force; with the hope to improve or enhance the lives of others from around the world.

Denice has been fortunate enough to sell her work both in the United States and internationally. She continues to participate in exhibits and charitable events each year, as she is always looking for ways to create work that will make a difference in some way and positively impact others. All of her paintings, narratives and series collections can be found in her full portfolio on her website. As well Denice’s work can be seen on her social media pages: Instagram, Twitter, Facebook and YouTube.