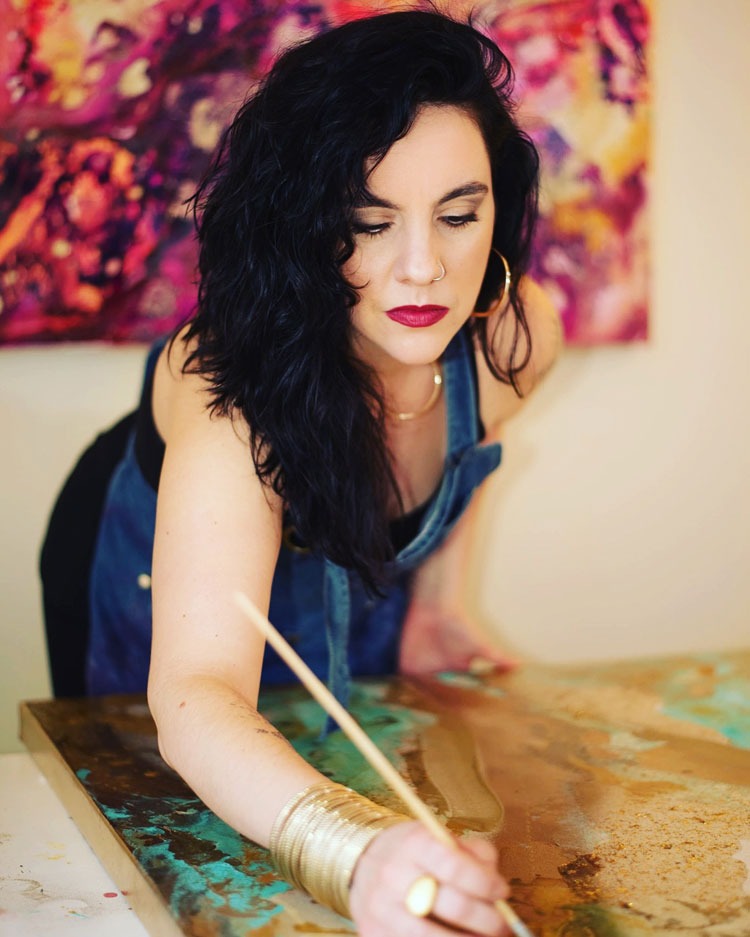 Canadian abstract artist Raven Zeller grew up in the stunning city of Vancouver, British Columbia. One of the perks of growing up in a diverse and major city, was that it allowed Raven the opportunity to immerse herself with all of the arts, culture and entertainment in the region. A few years ago she relocated to the North Okanagan region of British Columbia for a bit of a slower paced environment to raise her young family.

Growing up she was always being drawn to creative and artistic endeavours. In her teen years she was adamant that she was going to have a career in the visual arts. However; after being accepted into two prominent post-secondary art schools, she was unable to attend. For whatever reason, be it the distractions of youth, or a lack of confidence at the time she stopped creating art altogether. Although she felt a huge piece was missing from her life by not having had pursued art, she was caught in a state of limbo. Feeling paralyzed she was unable to create for almost 15 years.

Then in 2018, during a period of time that brought extreme pressure in her personal life, the creative dam gave way. With ideas and emotions flooding out, she started painting again and since then she has not stopped. What started as the need to paint for her own emotional well-being, led to her accidently stumbling into the art career which she had postponed for a decade and a half. After ignoring her authentic passion for so long, life caught up with her, putting her into a variety of deeply challenging experiences all at once. Allowing the creativity out, a talent which she had suppressed for so long was incredibly freeing. Shortly after she started sharing her work online she was presented with opportunities to join several exhibitions in the region. She has been consistently producing and showing her art since. 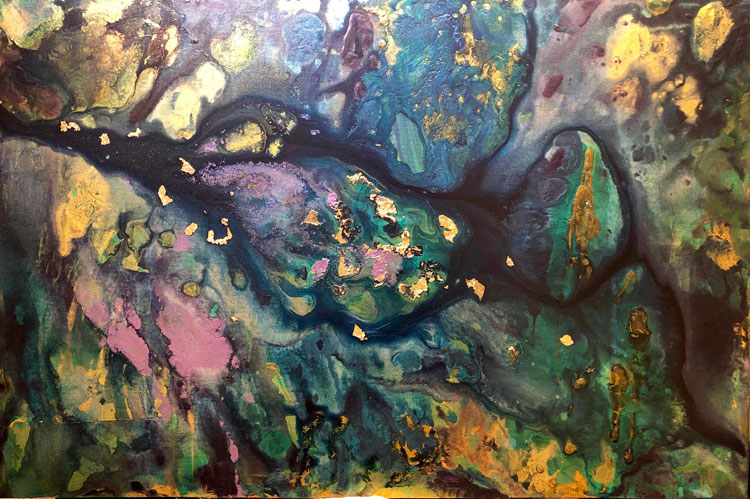 Raven has always been drawn to abstract expressionism and abstract contemporary art. For Raven, this form of art is the best way for her to capture emotions in motion. Although she does not want to label herself as a specific type of artist – she is most drawn to abstract mixed media on canvas at this point in time. Incorporating fluid movements, glittering accents, pigments mixed to shimmer once dry, and intuitive flow, Raven creates works that are organic. She is inspired by the way she experiences personal emotions moving through her body and how she interprets the feelings of others with whom she interacts in life. It is this sense of the human character that Raven transfers over onto canvas.

For Raven, her work is truly a spiritual process. The basis of each of her paintings is tied into how individual experiences shape humankind as well as the interconnectedness of people. While not religious, the sense of connection Raven experiences with the Creator or The Universe is a huge influence in her work.