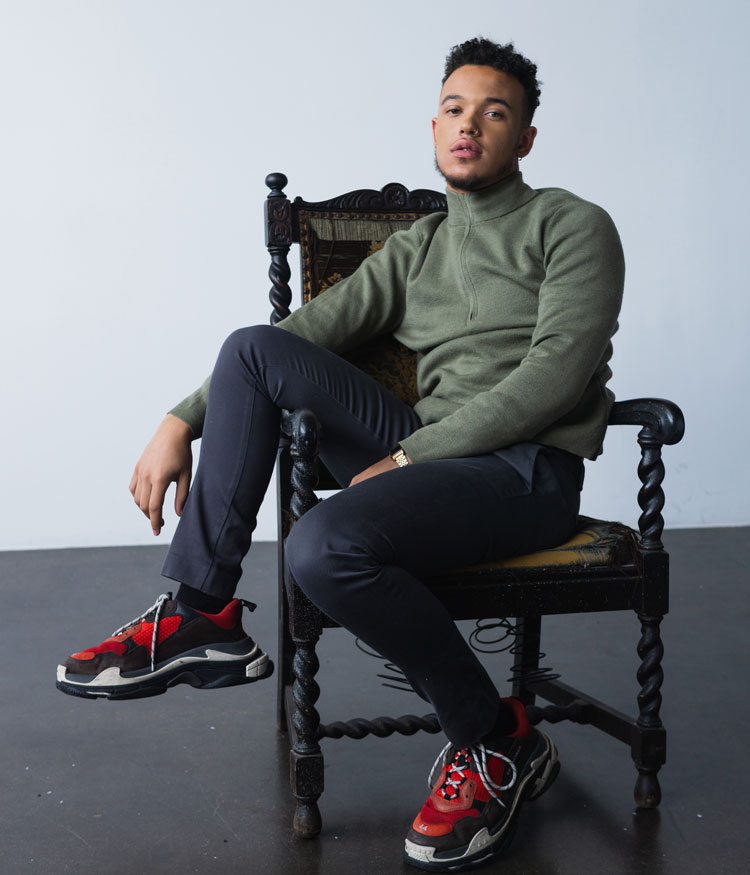 Music has always been my first love. I was super lucky to have really strong Jamaican roots and in a lot of Jamaican/Caribbean households music is huge – It’s the heartbeat of the house. When you’re in that environment you get consumed in it and it was something that I knew I wanted to always be immersed in. I started singing on karaoke machines on holidays when I was about 5/6 and I never stopped.

Based on the comments I received growing up and the things that I knew wanted to achieve it was evident to my family that from a young age I would do something which pertains to music. I feel like the idea of singing and being successful was what really made me want to have a career in music when I was younger, but as I’ve gotten older those elements have become less superficial and I do it because I love every single aspect of it.

I’m not entirely sure – I think we’re in a really special moment where music is making a resurgence and there is a lot of incredible artist who are rightfully taking the limelight. I think for me, to only be 20 and be so secure and sure of my sound is one thing that differs me to other artists.

Also, and in my opinion I think the power of my voice is another thing that makes me different. When collaborating with other artists we often come to a compromise and produce something that works within my vocal range. And lastly I have a great team around me who know me and my sound so we are covered on all bases.

Your latest release ‘Still Here We Are’ is out now. Can you please describe the creative process and explain the meaning behind the single?

So the song began in the December of 2016. I was in a very weird and strange situationship at the time. She and I wasn’t communicating well and the whole thing was falling apart – the only thing I could think to do was write down and express my true feelings.

Upon reflection it probably would have been a great idea to of told her rather than 3/4 years down the line. In March 2017 I went to Kingston, Jamaica and worked with producer Gray Hawken. Prior to this we had never, met never spoke – he was a complete stranger to me. We got in the studio and we worked on a few things that I had already sent to him. At the end of the session we had some spare time and we began to create something together, that collaboration became ‘Still Here We Are’

Two months later I got on a flight to Toronto, Canada and we finished the song. We then allowed the song to mature and get to where it is now. The song is story about a situationship where one person has their walls up so high, but it seems so good at the time and you don’t realise until it’s too late.

I’m only 20 and I have seen so much of the world while making music and performing music, it is a very humbling thought. Whenever I face hardships I remember how lucky I am and I think about the people I have met and the position I am in. Yes of course I have difficult times like everyone – at the end of the day I’m only human. I give thanks for what I have and normally that helps me, or I write down how I’m feeling and turn it into a song.

‘Give Me A Reason’ – I think this because this song is the most personal song I have wrote. It’s off my first EP “Baby Oh I”. The song was about my challenges I faced while trying to make something of my music. It was like trapped words, so it was about when I was 9 and I was the open act for Flo Rida, so much had happened after that and there was comments that I had been said to me that basically had made change my entire outlook on music at that point.

I was so sure that I had this idea that I didn’t want to disappoint people and this stuck with me for about 7 or 8 years. It took me so long to express how I really felt about it, which was so crazy. ‘Give Me A Reason’ could be perceived as a love song but it really isn’t, it’s actually a depressing song about journey and growth.

Yes, I have had three. One being touring America. Another being have people who I don’t know singing my lyrics in a venue in New York City. And being offered a record deal that I didn’t take. So touring America was incredible I’ve been to 33 states, from east coast to midwest to the west coast the Deep South back to the east coast. That was incredible, to experience that with two of my closest friends was insane.

While we was in New York, we performed at Rockwood Music Hall on the Lower East Side which I had no business being there because I was 19 at the time but, I was there and I performed and to see people singing my lyrics back at me there was overwhelming to say the least. My mom lived in NYC when she was younger and she used to tell me stories about that city so for the first time I was there that happen was incredible.

Finally, being offered a record deal was the moment that so many people dream of especially a multi million dollar one. I got flew out to New York got put up in Times Square and ate some of the most lavish food of my life, that was the first time I thought ‘I could get used to this’. I got walked into the office met the CEO, COO at time when people normally would be on holiday and I met them I could believe it. And I’ll always remember that moment because that was the first time as an artist I felt like I had been given a value which was a weird weird feeling. However, my mom raised to me know my integrity is worth more than any cheque, so me and team made the joint decision that it wasn’t right and we made the decision to continue as an indie label.

Timing is EVERYTHING. If you don’t think something is right make sure you voice your opinion, because at the end of the day your happiness is key. You’re the one that needs to put your everything into everything you do. Don’t force something, think of it as a brittle jigsaw, if your try to hard to make something fit it could all shatter.

I’m super optimistic about the future but at the minute due to COVID-19 we have to adjust new norms. As a team, we are doing all we can do but this industry relies on people, and if people are concerned about being in spaces that effects what I as a musician can do. But at the end of the day, everyone’s safety is paramount and as an artist I need to respect that and wait for the world to heal if you like. Then and only then can the countless conversations we’ve had about the future can fall into place but only when it is safe to do so.

Thank you for giving me the time to complete these questions and keep streaming ‘Still Here We Are’ and everything else I’ve made. I also hope everyone stays safe during these times of uncertainty.