Barbara Johanna Billeiter, also known artistically as Duckylemon, is a surrealist painter from Franconia Germany. As a child Barbara enjoyed painting. Her talent was evident from a young age where she finished in third place in the European school competition, with her representation of a phoenix, created from the ashes of roses.

As is the case of many artists, in spite of Barbara’s love of painting, her life initially took her on a different path. During this time she met her future husband and eventually they started a family. After the passing of her husband at a young age, Barbara, then 30, found her way back to painting. She enrolled in school and began her course of study, eventually graduating with an art diploma. Still looking to make her mark in the art world, Barbara developed her unique characters and her pop meets surrealism style of portrait work about four years ago.

Barbara’s paintings are intended to be timeless and they intentionally show one’s subconscious thoughts. As one’s subliminal thoughts are not always clearly evident, and not all subconscious thoughts are pleasant and positive, Barbara’s art is a study of both darkness and light; sweetness and bitter. It is this interplay of emotions that allow her to represent these contrasting feelings in a visually powerful way. The end result are multi-layered paintings displaying a contrast of opposites, pieces that represent the attempt to escape all social constraints.

Her pictures originate from personal experiences. They show an incredible depth of detail, to the point that Barbara’s paintings are almost a puzzle unto themselves, complete with hidden objects in each piece. Some might even categorize her work as “horror vacui”, which translates to “fear of empty space”. It is the concept of filling an entire artwork with detail to create a sense of completeness, something which Barbara feels is relevant to her artistic approach. 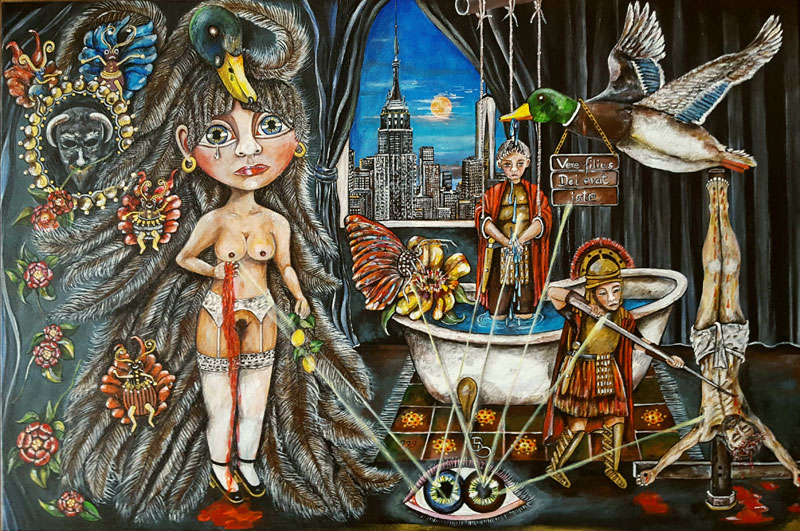 Duckylemon Is Taking A Bath In NYC

With so much to see in her detailed paintings, the viewer is still drawn to Barbara’s characters initially. These figures are embodiments of her soul. Their most impressive feature, the one which draws viewers in is the eyes. Barbara wants each observer to interpret the piece in his or her own way. She does not want to influence her audience’s connection with the work. Rather she wants each individual to create their own experiences, narratives, wishes and dreams based on her work.