Drawing on His Spirituality and His Indigenous Roots: Meet Painter Drew Rickard 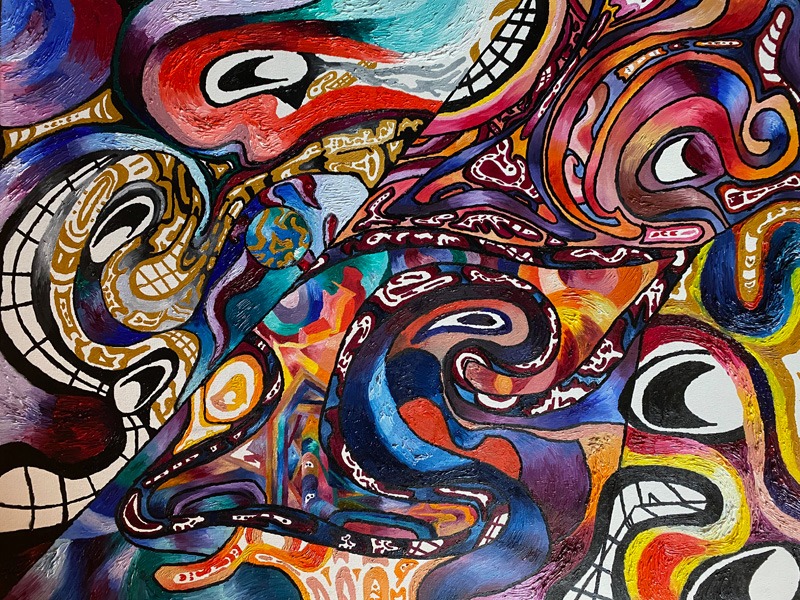 Four Corners of The Universe

Twenty five year old artist Drew Rickard is an Oji-Cree (Ojibwe and Cree) from Toronto, Canada. While born and raised in Toronto, Drew’s father hails from the Treaty #9 Territory, which is the most Northern part of Ontario, and his mother is from Nipissing First Nation which is just outside of North Bay, Ontario. With his parents coming from more remote areas of Canada, he has very strong roots that extend far beyond the city. Unfortunately, at the age of 10 Drew experienced familial tragedy when his mother was in a car accident. A year later, in 2006, his father passed away. As other family members had also passed it has essentially been Drew and his mother for the last fifteen years. In spite of these difficult circumstances Drew kept busy with athletic pursuits and for the most part he did well in school, but the events in his life did impact him. Many adults; teachers, friends’ parents, and others often felt he was distracted and lacked focus, not taking into consideration that he had to help his mother during those early years to recover from her car accident. For Drew the feelings of loss and pain never went away, they just became more potent over time.

As a child he was very creatively inclined, but as a teenager Drew became very selective with whom he shared his innermost feelings and thoughts. A lot of his really good friends, to this day, still do not really know all the details about his life. While in high school he started getting recognition for his athletic pursuits. His creative activities which Drew always enjoyed, but which others did not know about, had taken a back seat. He used his athletic pursuits as a springboard, graduating with a diploma in health and fitness, before enrolling in university for a degree in Philosophy, with a double minor in Indigenous Studies and Environmental Studies. While Drew was focusing on the academic path, he wanted to get back to his roots, as he felt something was missing. About seven years ago he got back into drawing, painting, and writing; looking for any means in which he could express himself. He is completely self-taught, never having had any formal training, not even watching online tutorials. This approach was very intentional; for Drew the essence of true creativity is to do something that has not been done before.

Drew’s unconventional upbringing, factored in with all of the emotions and memories he was suppressing from his youth finally led to the need to express his feelings. He began by focusing on media he had been introduced to as a child – clay, paint, pencil, and pastels. In finding his way back to art, Drew felt restored; he found solace. In a sense creating for Drew, has been therapeutic. After years of pent up feelings, where he did not feel comfortable sharing who he really was, he finally had a channel to express himself. All of the emotions he had felt over the years finally found a place and a purpose. For Drew the process of creating was more important than the final product or the possibility of receiving recognition for his art.

For Drew he believes that art saved his life. His style is influenced by Indigeneity, a dynamic process, but it is also reflective of his experience growing up in a fast paced city. His work is drawn from the dreams he has while sleeping and furnished by his experiences within the physical world. As such his style can be best described as surrealism, where he uses exaggerated expression in the faces to reflect the potency of the emotions he feels. He uses his art to express what people normally see and think, in the most unconventional terms. The effect is very dramatic, one where the ideas are stretched to their absolute limits, but are also free flowing and more remote. Drew’s pieces showcase the entire spectrum of feelings. He uses his art to learn from the more “negative” emotions and showcase them in positive ways to rewrite the emotive narrative. While he has pieces that are lighter, Drew recognizes the importance of sharing all feelings, knowing that stagnated emotion leads to larger problems internally, something he has personally experienced.

Drew describes his work as being an affirmation that he is still here. He is proud that Indigenous culture is more alive than ever, and that it never really went away like western thought predicted. Sadly it has been commonly perpetuated that the First Nations of Canada were accident prone savages, roaming without rhyme or reason through the lands. But upon closer examination one finds that the Indigenous ideas, feelings, and ways of being are much more sophisticated than the most advanced technology. The notion of spirit, of feelings and soul cannot be ascribed to a machine. Indigeneity has been somewhat scattered in more contemporary times, not as result of its own doing, but as a result of constant interference with natural functions. For Drew, his artwork is about the human as being a part of the circle of life, not in the centre of it, nor separate from it. His artwork is about thinking from a surface level, originally thinking that nothing is there, but upon diving in, realizing the depth, thus enlightening oneself from preconceived notions. 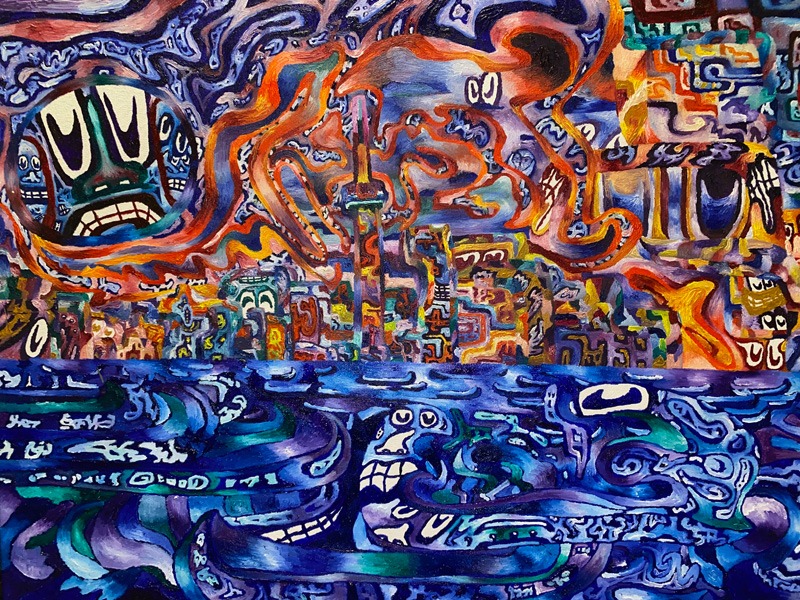 His hardships have definitely provided inspiration. For Drew he looks at how he made the most of astronomical odds working in his favour; experiencing everything he went through and coming out on top without compromising his spiritual integrity. While both his identity and the diversity of the city he calls home inspires him, this search for what is true from what is false, drives and inspires him the most. Having a totally distorted image of the world is what influences Drew’s work. The underpinning of his art is not really knowing what side one is on, or even who is on one’s side – the whole notion of not really knowing reality from fantasy. Discerning what is distinct from what is confused, are themes that can be seen in his work.

All of Drew’s work can be found on Instagram which also is where he shares his daily musings and some insights into his personal life.