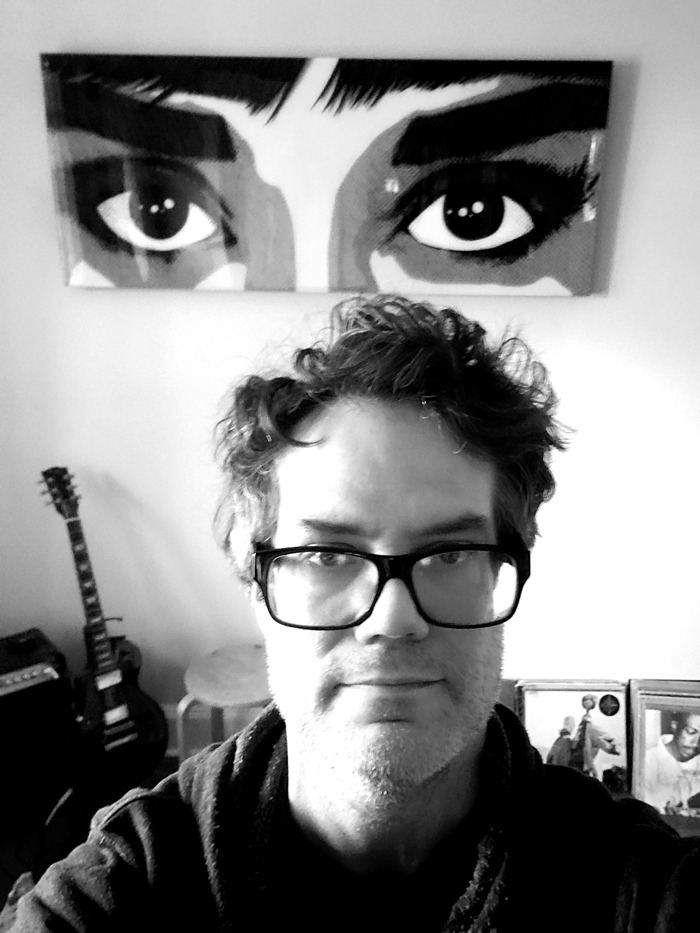 Trevor Phillips is a contemporary Canadian artist. Born and raised in British Columbia, he is an emerging force in the Canadian art scene. He is known for his graphic style paintings that focus on what it means to be alive, the underlying emotions behind the subjects we see. Trevor’s initial foray with the arts began in 2010 in the fashion industry where his focus was on T-shirt design; his goal to create wearable art pieces. All of that changed a few years later.

Today, Trevor is exclusively painting, creating large-scale canvas pieces. Emotionally connected to nature and the world around us, Trevor’s art represents his bond to the natural world as well as the hidden emotions people often suppress. It is through his art, that Trevor shows viewers what it is like for heroes, who society deems as “strong”, when the heroes let down their masks.

Trevor I am looking forward to learning more about you and your work. Before we delve into you art, I have to ask you – what is the story behind your website name and Instagram handle of Ebon Aves?

Ebon Aves is Latin for Black Birds. Back in 2010, I started a screen-printed t-shirt company and wanted to have a name that represented something unique to Vancouver, British Columbia. I immediately thought of the crows that would make their daily journey into the city in the morning and return to their roost in the evening. I fell in love with these amazing birds and befriended them with peanuts. They became my inspiration and ideology behind my brand. I have kept with the name ever since.

From what I understand you had an accident years ago that dramatically altered your life. Would you be willing to share with us what took place and how this influenced your ascent into the world of art?

Back in 2013, I was coming home from a concert and decided to walk home, as it was a nice night. I was waiting to cross on the street, when someone ran a red light and t-boned a drunk driver who then ultimately drove me into the building behind me. No one knew I was involved in the accident until first responders found me by stepping on me in the rubble. I was put into a drug-induced coma and rushed to the hospital. I woke up several days later in a lot of pain and unable to move with curtains surrounding me. Finally, a nurse showed up and that is when I found out I was in a bad accident. During my many months of recovery, I had plenty of time to think about my life, relearn who I was and what my priorities were. I needed to focus on my craft and use it to my advantage. No longer able to screen print, I turned to painting and reinvented myself.

You hear story like this and it leaves me speechless. It really does put things in perspective. Your take from this and the way you have used this experience to grow is inspiring. I know that comic books and eighties pop culture plays a huge role in your art. What is it about this subject matter that connects with you?

As a small kid, my mom’s boyfriend gave me a stack of comic books that were as tall as I was and I delved right into them. I was fascinated with the art, the stories, the imagination, and how they inspired me. I began to copy the art I saw in comics and I learned how to draw. 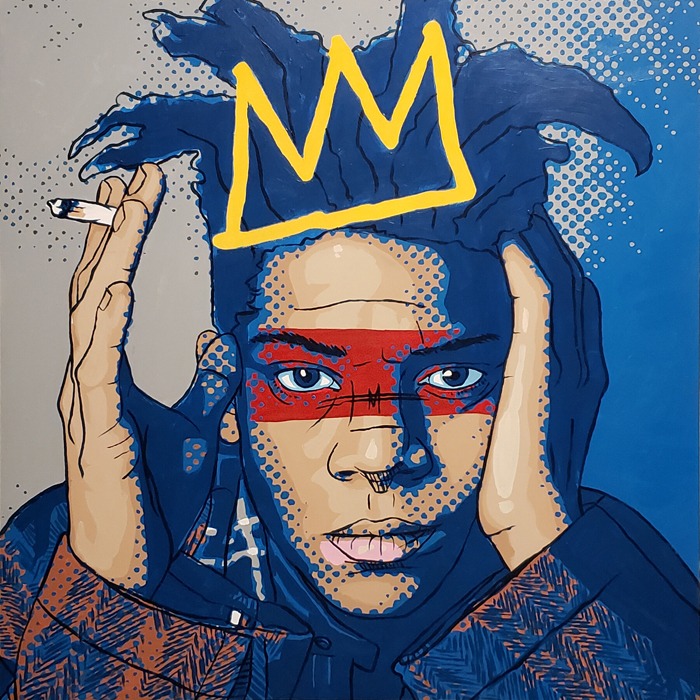 The Artist Not The Person But The Legend

When I first discovered your work, one of the initial observations I made was the frequent use of a “highlighted” line across so many of your subjects’ eyes. I personally love this touch. What is the significance to this and how did this stylistic component become part of your work?

It is kind of my way of representing the superhero in all of us. I also wanted to give a sense of war paint and strength in the subject. I usually use a red line but sometimes I try to incorporate it into the colours I use.

You have titled your three painting series: “Expressions”, “Icons” and “Animal Behaviour”. At first glance, they would seem to have no connection but I would suggest that they are indeed linked. For those not familiar with your art, what is the connection between the three series and do you have a new series planned?

I wanted to create series where I could always return to contribute to them. My main influences have been pop icons, expressions I admired, and my love for the animal kingdom and how we are a part of their kingdom. You could say the three are linked by human nature and how we are intertwined in admiring the world we live in. Expressions are about how we display our emotions through our facial expressions. A certain look can say so much. The eyes tell no lies. Icons are the people we look up to and the ones that have stood out in my mind. Animal Behaviour is a look into the animals that have made me an animal lover and those I feel an attachment to. In the future, I am looking to explore more intricate subjects like landscapes, architecture, and cloud abstracts.

I look forward to seeing these new themes and your presentation of the subject matter. Your work seems to combine various influences. The use of a stippling effect reminds me of the great Roy Lichtenstein. Your choice of colours and imagery remind me of Andy Warhol. Who were your artist influences and how best would you describe your style to others?

Growing up it was comic book artists like Marc Silvestri, Jim Lee, Todd McFarlane, Kevin Eastman and Peter Laird. Then I watched a movie called “Basquiat” which was about the life of artist Jean-Michel Basquiat. From that movie, I believed I could be someone like that – an artist who appeared to come from nowhere. I also admired Andy Warhol’s work. I like to use colours that complement each other and then throw in a splash of bright contrasting colour to catch your attention. I would describe my style as contemporary comic reality pop art. 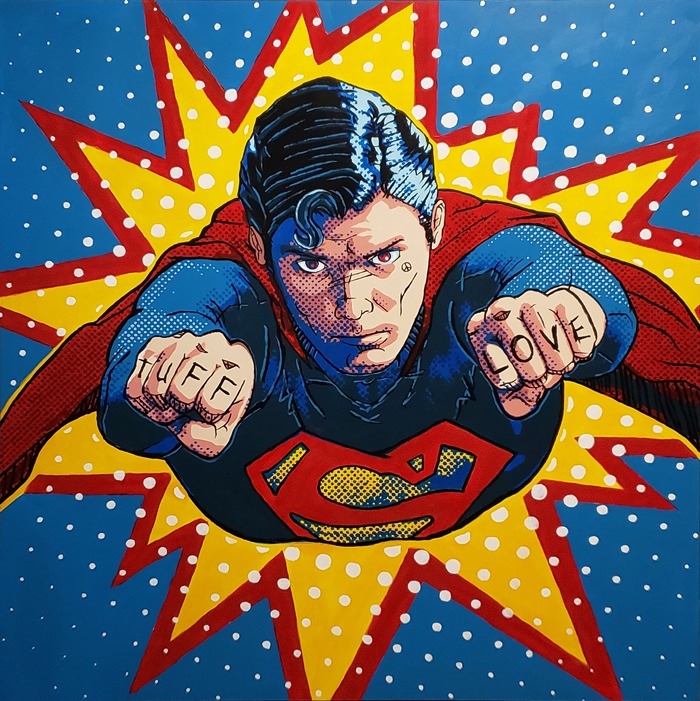 I Come In Peace

I would suggest that you have definitely created a style that captures one’s attention. In my experience, I have found creating to be a process. Is there a certain piece that for you was your defining moment; a piece where you thought, “This is it; this is my style, my identity as an artist?”

I would have to say the first piece I created after my accident is a defining moment for me. I had a lot of time to plan how I would continue to create in a way that I could begin to sustain myself and continue creating on a regular basis. I incorporated my knowledge of screen-printing, my experience with Photoshop in creating designs for screen printing pre-press separations and my background in drawing. I was so impressed with the outcome I knew I had to continue to explore my possibilities and focus on my art!

Being represented by a gallery has its own set of dynamics. Do you feel any extra pressure as an artist to create on a regular basis or produce works that align with your current style, to ensure consistency of vision?

I put a lot of pressure on myself to create. I take every chance I get to start a painting project. The more I create, the more satisfied I am with what I am doing. I am completely at home when I get to produce a meticulously thought out piece of art. I want to produce as many pieces of artwork as I am able before my time is up on earth.

Art is very personal. Is there any message that you hope others take away from your art?

I just want to have a connection with the viewer. I want them to be taken into my piece and held there with a comforting feeling, to get lost in it. I want to document my lifetime through the stylized pop art that influenced me. 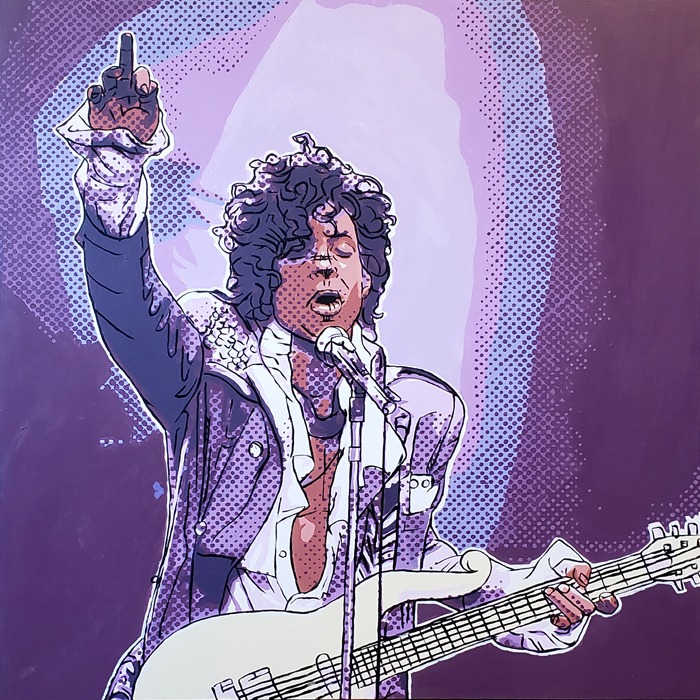 Take Me with U

Trevor, I have really enjoyed talking with you. As an artist who is making a name for themselves, can you provide any advice to those who are just starting out or who are finding it a challenge to gain traction in the art world?

Patience and persistence eventually pay off. Never give up on your goals and your dreams. If you work hard at what you love to do, it becomes reality. Approach galleries and artists you respect and talk to them about art and your intentions and goals.

Trevor, thank you so much for sharing your story with us. I know that I am looking forward to seeing what the future holds for you.

Trevor’s work is growing in popularity. His unique style is showcased in a number of galleries. His work is also available through his Website. To stay up to date with Trevor’s journey, he can be followed on social media through Instagram and Twitter.