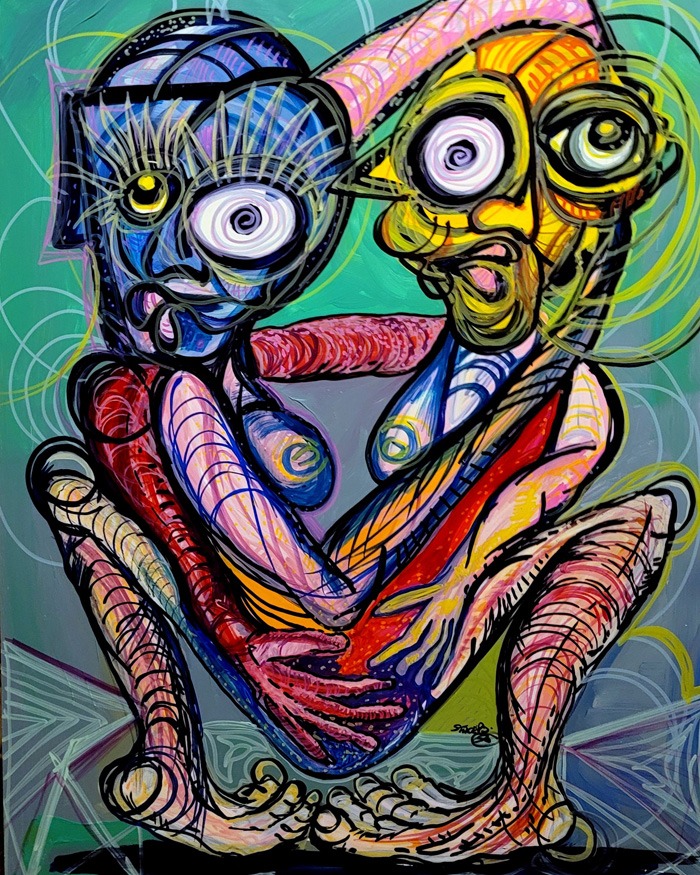 Stace DeWolf is an Expressionist artist living and working in Kamloops, British Columbia in Canada. He is married to a beautiful woman, Jocelyn, and together they have a blended family of six boys and 1 girl. Stace was born in Penticton, British Columbia in 1973. He first discovered his interest in creating while in Vernon, British Columbia, at the age of five. The first images he drew were military related and knights. From there, Stace expanded his drawing interests, copying images such as comic book characters and toys. This only furthered his love of drawing. By 1986, at the age of 13, a teenage Stace was into skateboarding and he loved the art in Transworld and Thrasher skate magazines which really inspired him to continue drawing.

While he always enjoyed drawing, it was not until high school that Stace’s eyes were opened to the endless possibilities of the art world. His family moved to Vancouver Island where they lived in a small mill town, Port Alberni. Stace’s art teacher was probably the most influential person in his life, although he did not know it at the time. His teacher would help develop his understanding of painting, drawing, and design. Stace’s teacher was tough and told him exactly what he thought. If his work was sub-par and sloppy, Stace was sure to hear about it, but always with an explanation. His teacher, Mr. Deiter Shlackl, saw something in Stace and took him under his wing. Stace remembers the end of his grade 10 year quite well. Shlackl gave Stace a box and told him to follow him to the supply room where Shlackl had gathered together paint, brushes, pastels, paper, drawing pencils and more. Stace was told to take the materials which he did. With his new found materials, he worked all summer long; drawing and painting on paper covered basement walls.

When school started the following fall, Stace brought in his work, dozens of pieces in all. Shlackl looked over all of the work with great pleasure and from that he created a curriculum specifically for Stace. The focus was on line, movement, gesture, and balance. Additional topics included composition and the importance of positive as well as negative space. Shlackl introduced Stace to oil painting and showed videos on the masters and modern art. Stace consumed it all; he could not get enough. He would skip classes to go to the art room. Regardless of the time of day, early morning, lunch, after school hours a Stace could always be found in the art room, experimenting and honing his talents. After graduating he stayed another year working on an advanced placement course; with the goal being to complete a portfolio of work for submission. Stace’s efforts paid off when he was accepted into the School of Art and Design in New York. Unfortunately he was unable to attend due to familial issues. Stace did attend another art school but he dropped out after two years. He continued creating until the spectre of addiction took over and he lost all interest in his passion. During those dark times Stace remembers feeling sick with guilt because he was not creating but the thoughts of art never left him, they were something he reflected on daily.

Stace addressed the aforementioned struggles and in 2016 he found his way back to his calling, more dedicated and passionate than ever – using his own experiences and inspiration for his works. As an Expressionist artist his work is heavily contingent on colour, strong line and emotion. He loves experimenting with and blending mediums, transferring the relationship between the mediums to paper and canvas. His work is intended to communicate with the viewer, to help them connect in a way that is personal and meaningful to them. Stace looks to elicit responses, be it good or bad, as he believes that “art should punch one in the stomach, leaving one not gasping for breath but gasping for more instead”. For Stace, his work focuses on taking feeling and creating a visual representation of what he believes the emotion looks like. From works that explore “people pleasing” to co-dependency; jealousy to envy; Stace explores the battle individuals find themselves in. He examines the demons in humankind’s own minds around self-worth; being good enough or worthy of love. Throughout this process his work really looks at his own personal experiences with both mental health and addiction – something that has touched everyone, directly or indirectly, which is why he believes his work reaches so many viewers.

Stace loves giving emotion a physical form. He often questions what would it feel like? What would it look like? He is obsessed with the notion that individuals are at war with themselves on so many levels, a struggle that can be masked, hidden and buried in a place with no endpoint. His experiences have inspired him; inspired the struggle and the fight to get through the toughest of times. Stace shares his art as a means to show how one comes out on the other side. For Stace, his art is also about resiliency and the endurance it takes, not just to survive but to hide and keep the facade alive. Using his lived journey, Stace focusses on reaching those who feel that they are alone, so that they do not have to suffer in the same silence he experienced.

The German Expressionists, Salvador Dali, Francis Bacon and Picasso were huge influences on his work. While he takes inspiration from them, Stace stays true to his own style as he carves a new path in the Expressionist art world. He recognizes that it is not easy; but as he views it, the journey is not supposed to be. His work is the most honest and true version of himself, one which he cannot hide in or from. Stace cannot take the easy way out or ignore the challenges. He cannot take what he has for granted and he cannot waste the opportunity that he has. To do so would be to ignore the reason Stace believes he was put on this earth. That is to be an artist and to impact others.

Stace’s powerful works can be seen on his website and his social media pages Instagram and Patreon.