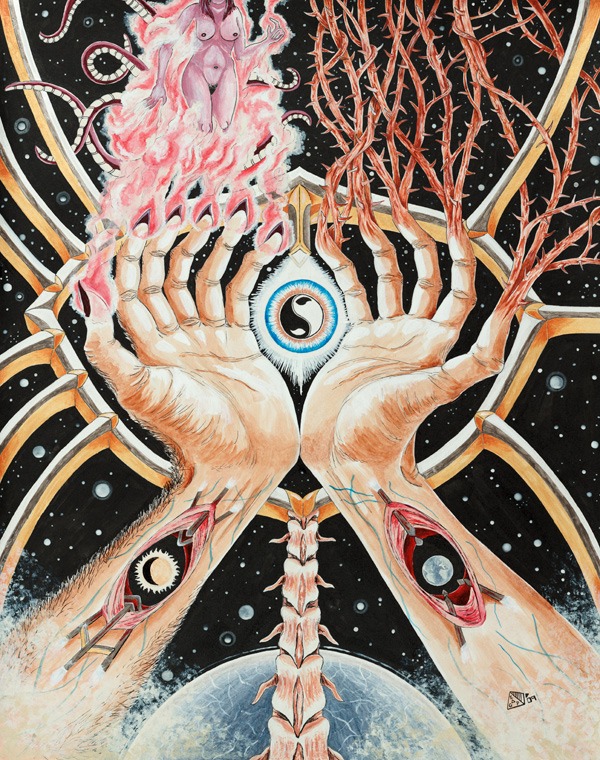 About Eric (Artist Bio): I began my long journey as an artist from a very early age. My fascination with science fiction, fantasy, and the natural world played an important part in laying the groundwork for what was to become my “Social Surrealist” style (a term I coined for my work) many years later. As a teenager I took and interest in comic books, photography, and film making. It was during my college years however, that I began to take a more serious look at the work of the artists Salvador Dali and H.R. Giger.

Their work inspired me to improve my skill as an artist. I also took an exceptionally strong liking to the mysterious nature of ancient Egyptian art as well. These sources of inspiration along with a desire to address more serious subject matter in my work took my mind and my artistic output in a more mature direction. My grandfather Gov. Russell W. Peterson, was a highly regarded environmentalist and political activist. His dedication to protecting the environment and speaking for the common good transformed me into a socially conscience artist. After college I worked as an intern at the sculpture studio of the professional artist, Charles Cropper Parks. I was inspired by his talent and work ethic as an artist and was even granted the opportunity to assist with several projects at his studio.

In the years following my internship, I began my career in the field of education and continue to create, show, and sell my own mixed media work. Working as an art teacher has taught me how to look at art projects from a different perspective and learn that each individual has their own unique way to view the world and approach the creative process. My artistic journey occupies an ever evolving and expanding universe.

Tell me about your inspiration for your piece “Addicts in the Eather”. I had the privilege to see this one in person and it was one of the ones that piqued my interest in your work.

“Addicts in The Ether” is a commentary about American culture being addicted to so many unhealthy things. Oil, prescription drugs, junk food, guns, our phones, etc. We are hooked on so many things that distract us from being connected to one another and to the natural world. The piece could be interpreted as more of an environmental warning as well. We are sucking the earth dry. My grandfather was a well known environmentalist, so it’s an important issue for me. 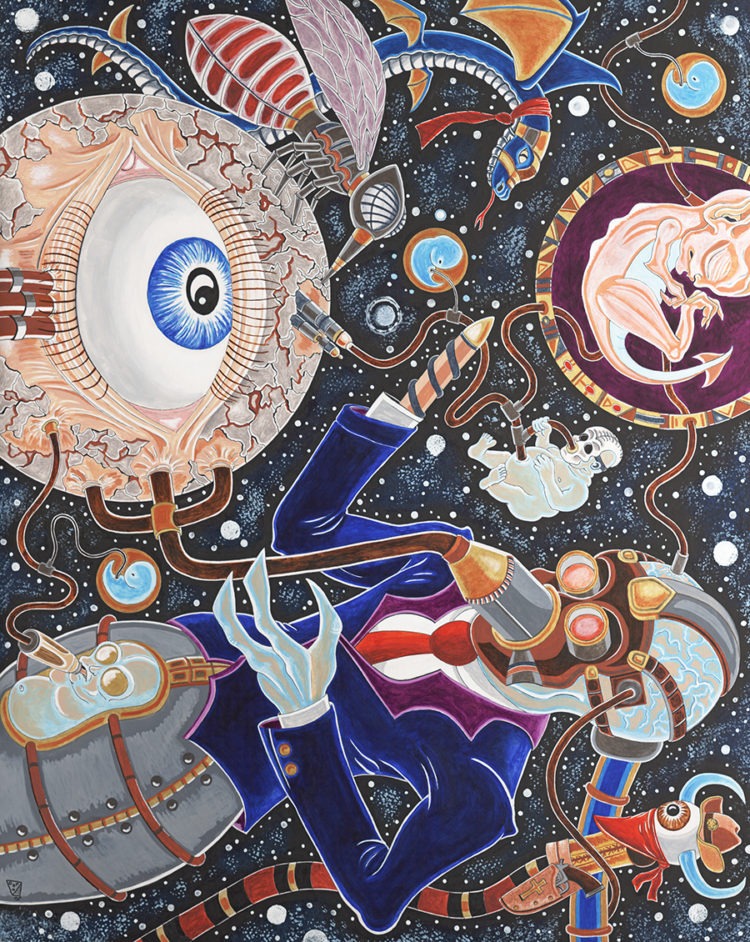 Addicts in the Eather

Your piece “Vampires of Industry” is intriguing to me. I would like to hear more about its inspiration… Would you say that this one is about corporate greed and its impact on our environment?

Yes, it’s definitely about greed. The vampires are representing the corporate elite who in my opinion are like vampires. There is such a wide income gap between the rich and poor in society right now. It’s an unbalanced system, and the poor always end up suffering the consequences. Those at the top are literally sucking the world dry of both money and natural resources. 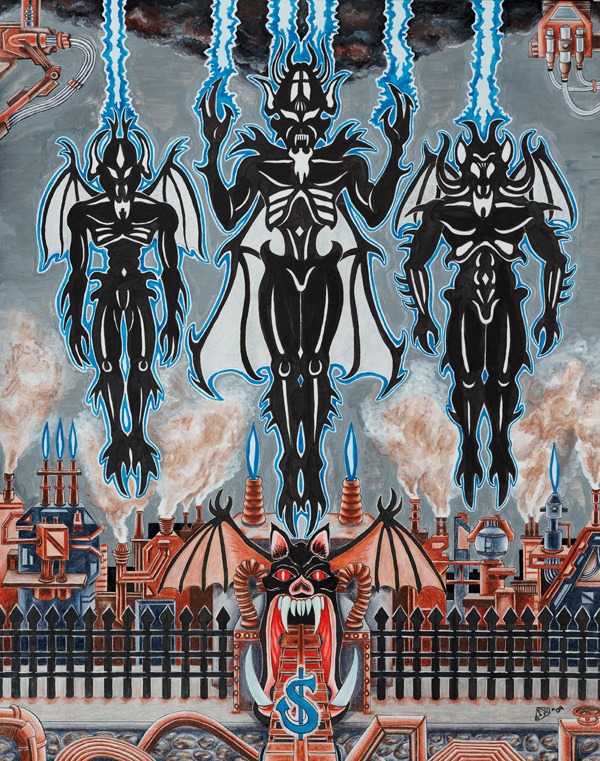 Okay, now how about Libidine Foeda?…This one seems to put a unique spin on religion and spirituality? Please tell me more about this one!

It’s a little more personal in theme, but I still tried to illustrate an observation about organized religion that I think many people have begun to notice in modern society. The title is in Latin and roughly translates into “dirty thoughts”. I was raised Catholic (but no longer practice or participate as one), and I sometimes struggle with the issue of how religion wants to interfere with our intimate lives. Some forms of organized religion think it’s their duty to invade people’s sex lives and dictate who they can or cannot love. It’s really no religious leader or politicians business to be in our bedrooms. 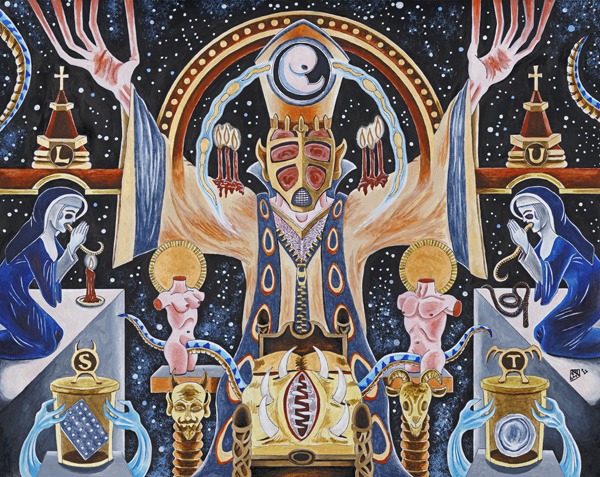 Your work is super intricate in it’s detail…Will you explain a little about your process? Approximately how long does it take to finish each piece?

Being a lifelong science fiction junkie, I always took a keen interest in the look of science fiction films and the complex set designs and machinery that was created by the filmmakers. I also love artwork from ancient civilizations such as the Egyptians, Mayans, Aztecs, etc. The art that came from those cultures was so intricate and heavy of symbolism. It’s mind boggling to me that ancient people had such fantastic talent; it’s rather humbling. I try to pay tribute to these influences. I almost feel like it’s my duty to carry on a bit of this tradition in my work and give viewers a feast of visualizations.

In regards to the creative process, I usually begin with a very basic composition that starts in my head. Once I work out the large elements of the composition with some rough sketches, I’ll move on to the large scale piece. The smaller details are absolutely a surreal, type of stream of consciousness effort. I allow my mind to slowly fill in the details as I work on the piece. It’s not a linear process, but in the end I end up with the symbolism that ties the theme all together.

It’s hard sometimes to pinpoint the exact amount of time a piece takes me. I’ve cranked out as many as 3 finished pieces in a matter of 4 months when I’m really, “in the zone” so to speak, but my work schedule is on average fairly erratic. I’ve had some pieces take me as much as a full year, maybe longer depending on how many distractions I have going on in my life. I work full time as an art teacher, so most of my personal art time happens on weekends or school vacations. 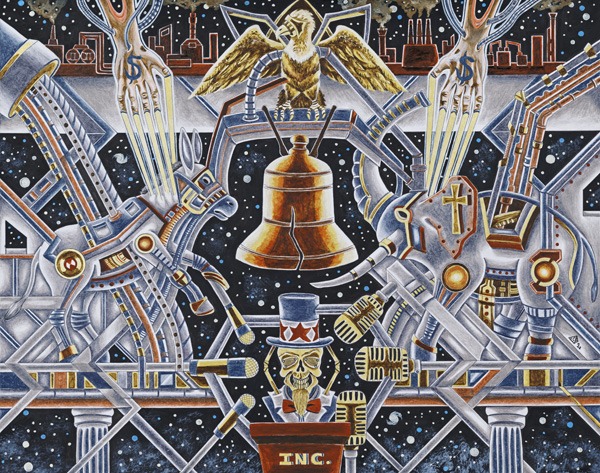 What direction to you feel your work is headed?

I can guarantee no matter what my work will always address some fairly heavy subject matter whether it’s a personal issue or a more global concern. Sometimes I force myself to loosen up a bit and not get too caught up in the “story telling” with my piece and just let my stream of consciousness take over a bit. I know there will be more pieces addressing environmental issues for certain. Taking care of our environment should be a high priority to humans as the health of the environment is the same as the health of the human species.

Thank you very much Lisa for giving me an opportunity to share more about my art and my philosophy. I hope in some way what I do as an artist may get some people thinking a bit more about the world around them. If nothing else, my goal is to grab people’s attention and maybe make them pause for awhile in our very chaotic modern day ADHD society! If you do like my work, follow me on Instagram and facebook. Just fair warning though, I get pretty political at times with my posts, so be forewarned!