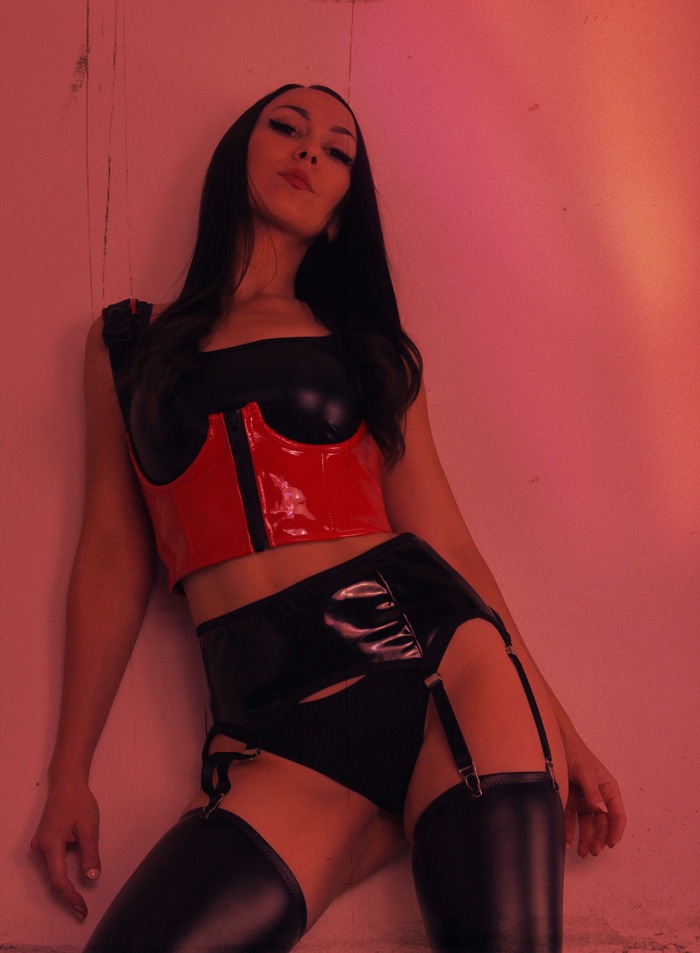 With years of experience in the music industry as a singer, songwriter, and producer, topped with her endless live performance credentials, Andrea is an optimal example of a continuous and thriving success.

Andrea has had countless musical releases, international tours with world renowned artists, and songs airing across the globe on television and radio. She has also reached as high as #7 on the Italian iTunes Dance charts and has collaborated with influential chart toppers and Grammy nominees throughout her career.

After starting her own record label Scarlet Cartels and sub label Red Cartel, she has assembled an exclusive powerhouse team including dance music icon Starkillers which whom she collaborates with on many of her projects. From techno to melodic house, R&B to dark, gritty pop, her label has the coolest vibes for many different tastes.

Andrea also has her own monthly DJ mix show “Fresh & Wild” which includes the freshest and wildest house and techno records. The show is syndicated to over 90 radio stations worldwide including the massive radio platforms DASH Radio and Mix 93 FM in Los Angeles. With steady releases lined up and in the works, stay tuned for what’s to come from this young Canadian talent.

I’ve been performing for all my life and I’ve always loved to be on stage. I began writing about 16 years ago and had my first taste of radio airplay shortly after that. I think that’s what really drove me to continue pursuing music and to have the strength to go through the ups and downs of what it takes to be successful in the industry. It was crazy to hear myself on the radio and I knew I wanted more of that. I also really looked up to strong female role models such as Beyoncé (and Destiny’s Child), Alicia Keys, and Christina Aguilera. These artists have definitely been a major inspiration and influence in my work.

What differs you and your sound from other singers, songwriters and producers in the music industry?

From the beginning of my career I’ve always released projects that were either in the style of Dance/House or R&B but they were always released as separate projects. After having so much experience in both genres, I’m now combining styles in a unique and edgy way so that the outcome is an unheard of mix of Electronic/R&B/House. I also have tons of experience from way back performing genres such as rock, soul, and country so I always find myself adding instruments such as soaring electric guitars into my productions. I absolutely love the feel that details like this add to my music.

Your latest release ‘On The Rocks’ is out now. Please describe the creative process and inspiration behind the single?

‘On The Rocks’ is the debut release on my new label ‘Red Cartel’. Again, this song is a great example of adding the electric guitar element to an Electronic/R&B record. I kept hearing the phrase “On The Rocks” everywhere and I knew it would be a cool hook to write from. Then I thought of the first line in the chorus “Love drunk like it’s on the rocks” and knew that was it! I wrote the entire song off of that one line. Any lyrics that had to do with being in love, being drunk, being love-drunk, etc., were what I was looking for. I collaborated with Starkillers on this track and he really helped me knock it out of the park. He always has the edgiest, coolest, darkest ideas for every song we do and working together we were definitely able to make this song come alive.

How did you go about starting your label and sub label?

After working on music with Starkillers for about a year, he suggested I consider starting my own label. I immediately knew that’s what I wanted to do. After labels and managers trying to control every single move I made for over 10 years, there was no way I was going to let another label control my career again. We began setting up the label “Scarlet Cartels”, which is the platform for our house releases, by securing the distribution with LabelWorx in the UK. I set up all the social media, created artwork, and finished the debut release for the label titled “XS” by myself and The Wulf. So far I’ve had 5 official releases on this label. It’s been amazing finally being in full control. I then set up my sub label “Red Cartel” which releases all of my R&B/Electronic records. “On The Rocks” was the debut release on this label and we have many more projects on the way!

There are definitely many good and bad days as an artist. What keeps me motivated is reminding myself of how much I accomplish each year. A few years ago I wouldn’t have believed that I’m in the position that I’m in. Why would I give up now? Less than a year ago my radio show “Fresh & Wild” was only on one station. This year alone I’ve already secured 92 monthly syndications worldwide on FM, Satellite, and Online radio stations worldwide. Remembering things like this is what inspires me to keep growing.

I think I would have to say my record “Runnin” that I collaborated on with Starkillers. For me it’s the most meaningful because I finally achieved the sound that I had been trying to reach since I began writing. Everything from the lyrics, instruments, arrangement, etc., was exactly what I had been aiming for my entire career and it was the most “ME” out of everything I had ever recorded. To top it off, I had the opportunity to finish this song in a beautiful studio in LA which was really motivating and just really made the song such a memorable experience for me.

One of the biggest lessons I’ve learned is to control as much of your career as possible like I mentioned earlier. Don’t let any manager or label hold you back and try to control you whether it be your creative process or even as far as your personal life. I was held back for many years and had to learn this the hard way but I am glad that everything has worked out amazing for me now.

I feel like I’m growing as an artist at such a rapid pace and there are so many things I want to do. There are many projects in the works for both of my labels. My team and I are really pushing the envelope our next releases and I’m so excited to share them with everyone. I’m really focused on building up my platform and growing my radio show. I’ve also been involved in crypto for 3 years and it’s been amazing to see that the music industry is integrating into the crypto space. Starkillers and I have partnered with one of the major crypto companies called Zilliqa in Singapore to release our first NFT featuring our song “Light Beams” and there is a whole series on the way! I’m very excited about the fact that I will be able to promote my music more and more in an industry I’ve grown so passionate about over the past few years.

If no lockdown had ever happened, I don’t know if I would have grown and learned quite as much as I have. I’ve mainly been focused on really getting insane with my production skills. There is a never ending list of things you can learn about production and I’m always trying to improve so that my music keeps getting better and better. I feel like I’ve definitely come a long way with producing since lockdown began last March. I want my next set of releases to be insane.

Be sure to check out my social media to stay up to date with everything I’m working on. My music is available for streaming & download on all major platforms. Thanks for reading this interview 🙂

‘On The Rocks’ is available now via all major platforms.