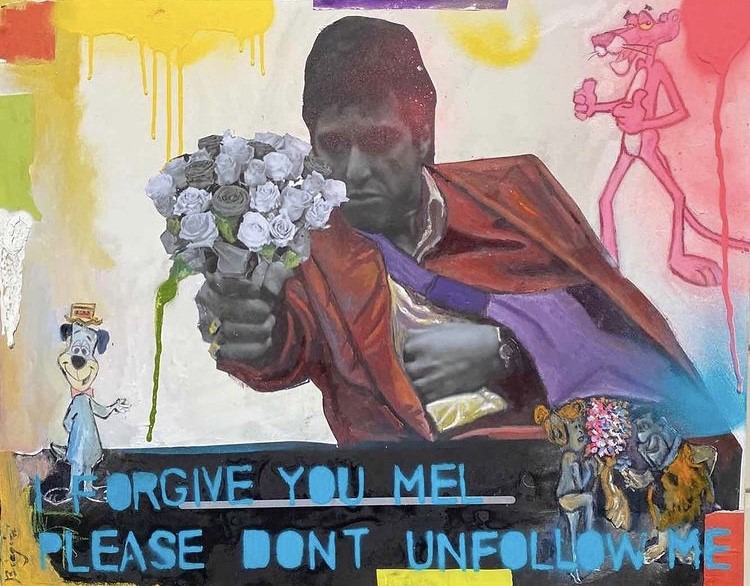 I Forgive You Mel

Nick Biagini was born on June 27, 1962 in Gioiosa Marea, Sicily, Italy. His family arrived in Canada in 1967. Nick attended Neil McNeil High School in Scarborough. He attended the University of Toronto receiving an Honours Degree in 1984. He received a Bachelor’s of Education from York University in 1991 and he then completed a Masters’ in Education from York, in 2001.

Nick is a self-taught artist who paints primarily in oils. He has had many successful exhibitions in Toronto and has completed many commissioned works. His paintings are collected locally, nationally and internationally. The Impressionist artists initially influenced Nick. Eventually, through his own studies, he admired the freedom expressed by the Abstract Expressionists. Later he discovered the work by Jean Michel Basquiat. Basquiat’s art inspired Nick and he went back to his roots, once again feeling the need to make a statement about what is going on in society.

Nick has been influenced by Pop Art, namely, Graffiti style art. He has used this style to create what has been dubbed, “Gangster Art”. Nick has always been intrigued by his Sicilian background and the reputation Sicily has had with producing a “gangster mentality”. He wanted to dispel this through his recent paintings. By using gangster images in an unexpected context, he hopes to promote feelings of love and forgiveness instead of the stereotypes of revenge and death.

Nick uses oil, paper for collaging and finishes the work with resin to seal them. In the end, Nick paints because he just loves the act of painting and the opportunity to create something unique and original! His powerful and unconventional “Gangster” style works can be found on his website and on his Instagram page.