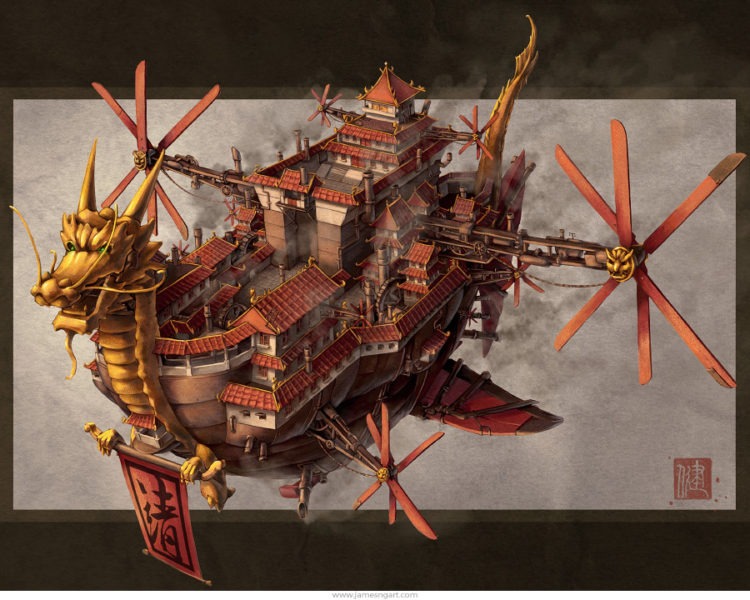 “Imperial Airship – Generating mass air pollution in its path, the Empress’s airship is big enough to block out the sun as it approaches a village, demonstrating the overwhelming power of the Imperial family.”

Recently I had the pleasure of interviewing James Ng. James was born in Hong Kong, where as a child he developed his love of drawing. His passion for art and talent, only grew over the years and this led him to attend the School of the Art Institute of Chicago, on a scholarship. He then completed his Bachelor of Fine Arts at the School of Visual Arts in New York, where he majored in illustration. After living in the United States, James has returned to Hong Kong where he works as a freelance concept artist and illustrator for games, books and comics.

I find that each artist has their own story behind their journey. What led you to becoming an artist?

As a kid I drew day and night. My mom told me I learned to hold the pencil before the chopsticks. And even now, I would still hold them weird. I remember I would imagine fantastical scenes in my mind, and I would want to show that to someone, and the only way I knew how was to put it on paper. That’s the main driving force for me in creating art, I want to share my vision. It is also why I’m never satisfied with my work, my drawing skills can’t really what I’m imagining. I’m unsure if it ever will be, but I do enjoy process of trying and improving.

What is the process you use to create your art?

My technical process is quite generic. I draw with pencil, ink and charcoal, then I colour using photoshop, applying traditional techniques while using a digital brush. In the end, I think materials, be it traditional or digital are just tools. The real process is being inspired and following through with the motivation, creating something from it, instead of just letting the inspiration pass by. 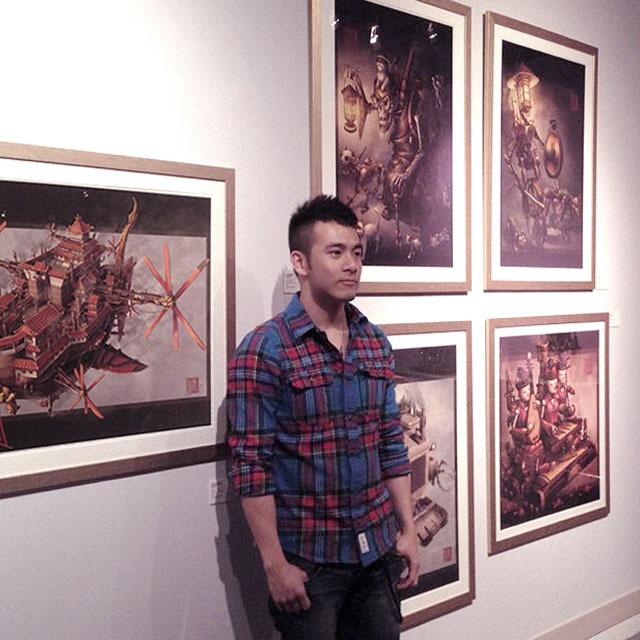 You have this very distinct style – as soon as I saw it I immediately thought of Final Fantasy. In examining it further, it seems to blend Steampunk, with a stunning Asian aesthetic. Is this a fair description of your work? How would you describe your work and what has influenced your style?

Imperial Steam & Light is my staple art series and Chinese Steampunk would be an accurate description. The idea behind the series based on the possibilities of a world where the Imperial Chinese were the first culture to have gone through an industrial revolution, changing the rest of history and technology as well as what we now consider as a model for a modern city.

I’m very interested in the Chinese Qing Dynasty and the modernization of non-European countries. Because Europe was the first to modernize due to the English industrial revolution, other countries around the globe have been playing catch up ever since. The standard of modernization is basically westernization, as the rest of the world becomes more modern, it also becomes more like the west.

I began to wonder… what if another culture was the first to modernize during the turn of the last century, if China was the standard that other countries had to work towards, what would things look like today? Maybe skyscrapers would look like Chinese temples? Cars would look like carriages? Perhaps China will still be in Imperial rule? And maybe we would have fantastical machines that look both futuristic and historical.

That’s the idea behind my personal project, each image in the series is my attempt to answer this hypothesis and I ultimately want to build a world revolving around this inspiration.

Interesting to note is that I actually didn’t know the term Steampunk when I first started. Steam engines appear in the designs because that was the main source of energy at in that time period. When I posted my work online, the term “Steampunk” kept appearing in the comments. I googled it and instantly fell in love with the imagery. Since then I’ve been blessed by continual support from the Steampunk community, and I’m proud to consider myself a Steampunk artist.

Do you think that your work is opening up the eyes of society to the world of Steampunk and allowing others to see this sub-culture differently?

I sure hope so! The majority of Steampunk focuses on the Victorian era, which is of course expected as that’s where the genre started. But I think it is capable is much more. The era in which Victorian Steampunk is based is also the time when different cultures in the world clashed for the first time on a global scale. It is expected that people from different cultures have strong connections to this part of history. I love that Steampunk is now more inclusive to all, this will only allow the genre to grow.

Part of the appeal to your work are the interesting narratives behind each piece. Are all of the pieces connected in one larger storyline?

All the pieces from Imperial Steam & Light belong in the same world. I picture each design as part of a world with its own function and history. Many of the current designs are interconnected and will appear in a comic book that I’m creating. For example, the Immortal Empress is the main antagonist of the story. 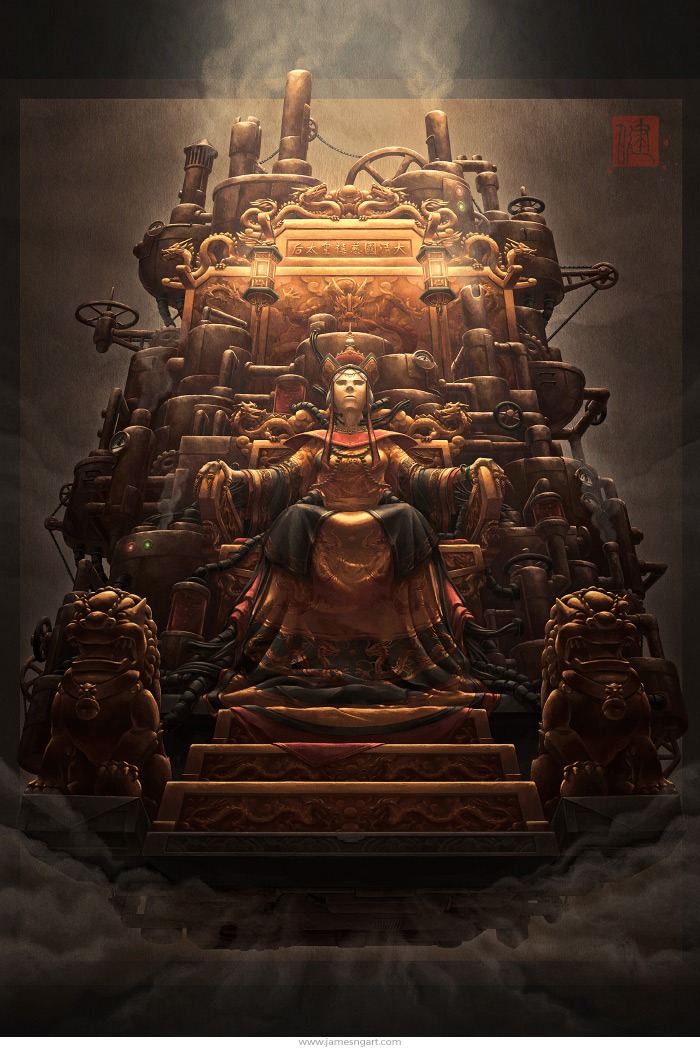 “With the exception of silver hair, the Immortal Empress retains a youthful appearance. She is permanently attached to her floating golden throne, that pumps a mixture of Mitha and advanced medicine directly into her ageing body. Essentially half human half machine, her place on the throne is eternal, as is her rule over the empire.”

Her golden throne was created by the Imperial Inventor; 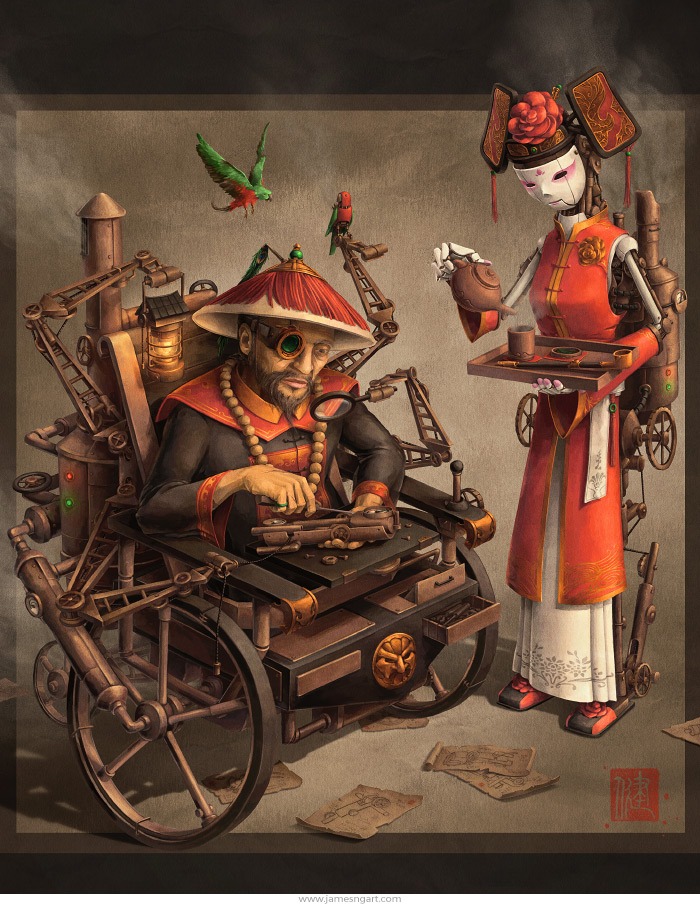 “Losing almost everything in a horrible engineering accident, the inventor now focuses all his time creating new machines for the Imperial family. His only companions are his robotic servant, and pet parrot, for whom he also created a robot friend for.”

While the medicine that courses through the Empress’ veins is concocted by the Crystal Herbalist. 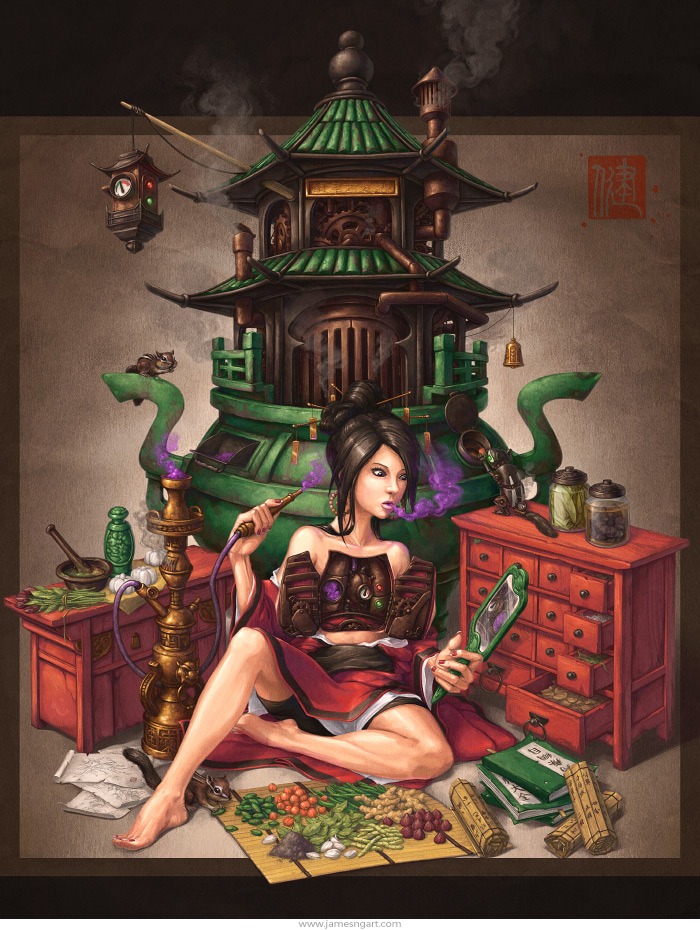 “Aided by a pack of chipmunks, the Crystal Herbalist fuses ingredients into a smokable extract. Measuring the potency with the gauges in her reinforced organs, she offers the most potent results to the Empress to prolong her youth and reign.”

Besides being interconnected I also really enjoy when someone tells me they learn something about Chinese culture from my work. I make a conscious effort to include interesting bits of tradition and lore into the pieces. In Western media, Chinese culture have been somewhat reduced to Kung Fu and Dim Sum. I would love to expand that through my artwork. I’ve included bits about wedding traditions in Bridal Carriage. 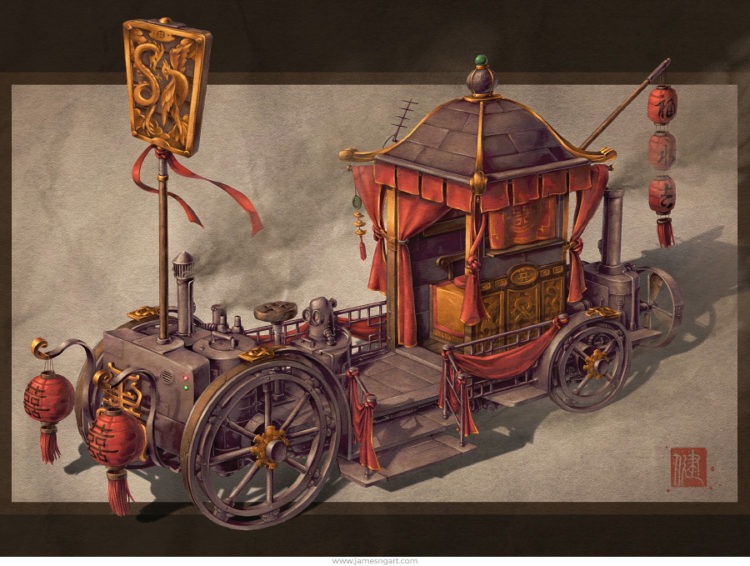 “In traditional Chinese marriage, the hour of the ceremony is crucial and often determined by a fortune teller. Skilled mechanist combined a traditional bridal carriage with the power of the steam engine to ensuring the timely arrival of the bride, all the while displaying the wealth of the family.”

And Chinese black magic in Exorcist. 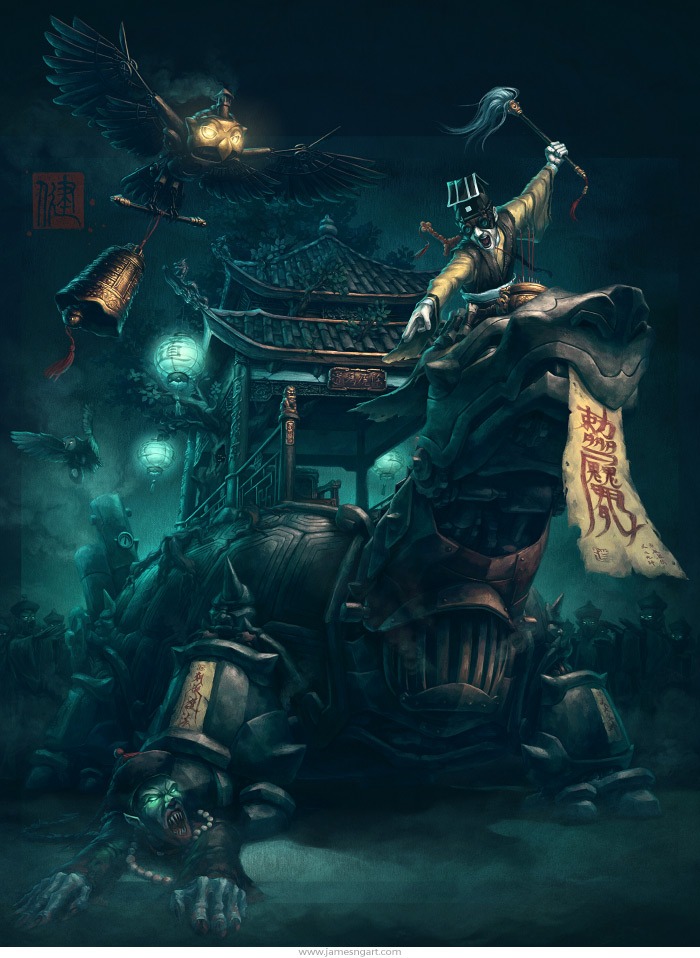 “The Exorcist combined the brute force of his steam powered mount and traditional Chinese black magic to repel the undead. He performs a ritual at the altar atop the head of his mount, while a family of pet owls employ charms, a golden bell, and Taoist mirror to enfeeble the horde.”

I understand that you want to create a comic book. Will this be based on any specific pieces or subject in your art?

Yes! The story of course takes place in the world of Imperial Steam & Light. I’ve partnered with a writer and have been working almost daily. We are putting the finishing touches on the first arc and will launch a Kickstarter once I have parts of the first chapter drawn. You can see some initial sketches here: jamesngart.com/imperialsteamandlight

The series have been part of my life of the past 9 years, but I’m still very passionate to take it to the next step. We are working 6days a week to improve story, characters and scenes, so please stay tuned!

Art is very personal. Is there any one piece which has special meaning to you or which you feel is your most rewarding work to date?

The Imperial Airship is the piece that started it all. I received such praise from it, and it even allowed me to travel back to New York after graduating to attend an award show and exhibition. It’s the first piece of the series and still the most popular. I sometimes have mixed feelings about it, because I know my technique have improved since then, but nothing I’ve created since is quite as iconic as the airship.

While working on the comic recently, I’ve finally understood why. While the other designs are parts of the world, the airship really was a window to it, allowing the viewer’s imagination to wander. I really think the next step for me is to show the world through narrative. I believe the comic book will open that window even more and truly help me share my vision with the viewers. After all, it is why I became an artist in the first place!

Aside from the comic book, where do you seem James Ng a few years down the road?

I will have my own studio with other illustrators. I’m actually in the process of looking for space and hiring now. In a few years, I will have my small production team, working on sequels and spin offs of my comic book and other projects together.

Sorry if that sounds over-confident! When it comes to goals, I try to say “I will” instead of “I hope”… will it actually happen though? I hope. haha

In closing are there any messages that you hope others take away from your art?

Yah! I’m very thankful for anyone interested in my work and who would even read all of my babbling! I started Imperial Steam & Light in 2008, it was a hobby based on my own interest. I never imagined it would have given me a career in arts and allow me to reach so many people. If it was not for the support of others, I wouldn’t have seen the value in my art. So thank you all!

You can connect with and follow James’ beautiful work, his fusion of Chinese culture and Steampunk at jamesngart.com or @jamesngart on various social media sites. I know that I look forward to his upcoming comic and am excited to see both the story line and James’ incredible work. Stay tuned and look for the comic Kickstarter!