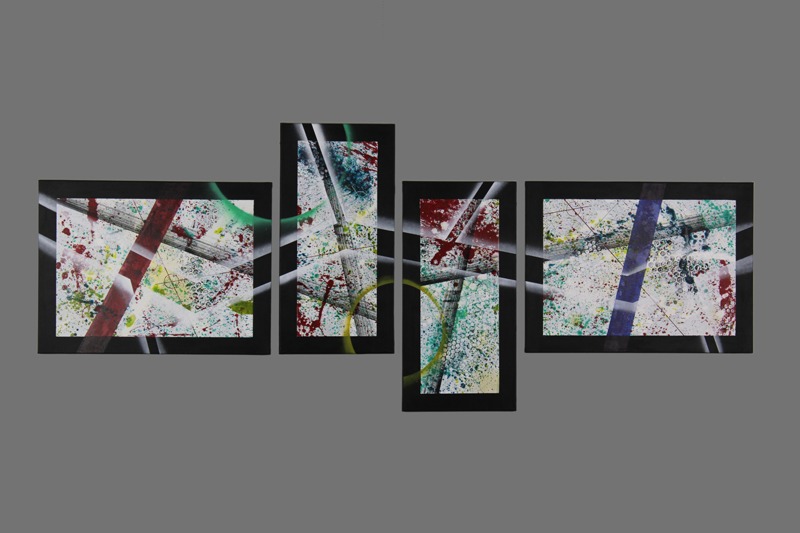 Sean Willis, from St. Albert, Alberta, Canada, is a 48-year-old husband and father to two boys ages three and seven. He is a civil engineer by day and a self-taught abstract artist by night and on weekends.

Growing up Sean loved the freedom and expression of skateboarding, music and art. At the same time, he appreciated the structure and rules of team sports, math and science. As high school neared an end, architecture seemed like a good fit for Sean blending creativity with structure. In the end, Sean, like his father and grandfather before ended up choosing to pursue a degree in engineering. While a practical choice, it was definitely a grind for Sean. By the time he had received a Bachelor’s of Science in Civil Engineering from the University of Alberta, he had no interest in staying in school any longer. He has spent most of the past 20 years working as a transportation-planning engineer. While the career has been fulfilling in many ways, his desire for creative expression has never ceased.

Sean has always loved art and the creative process, but until a couple years ago, this usually took the form of doodles on the side of meeting notes or simply colouring in his favourite zombie colouring book. It had never crossed his mind that he could paint. It always seemed like a pipe dream, something for individuals with far more skill and training. Then one day he stumbled upon John Beckley’s abstract painting videos on YouTube. Not only did Beckley’s style speak to him, but also his videos gave a glimpse into process, tools and techniques, making painting seem achievable. Before long, Sean converted a bedroom in his house into a “studio”, and has been painting steadily since.

As an emerging artist, Sean is still finding his way; however, he typically works between two general aesthetics. On one hand, he loves to work with simple shapes, clean lines, movement and textures. On the other hand, he also enjoys creating pieces that are rooted in the attitudes of hip-hop, punk rock, skateboarding and graffiti. Regardless of the style or aesthetic Sean is working towards, his pieces are always bold and contain bright colours.

A Dash of Colour

Many things influence his art. The biggest draws of inspiration come from architecture and design, street art and graffiti. While the works of so many talented artists inspire him, for Sean he appreciates more than just the finished product. He respects and enjoys seeing the creative process of other artists – the tools and the techniques that they use. Adding to his unique approach to painting is the subtle energy he gets from the music he listens to while creating. With a diverse range of tastes from the Chainsmokers to Public Enemy, from Nas and A Tribe Called Quest to the Deftones and Black Sabbath, Sean’s work takes on its own form and life – influenced by the talents of various musicians. As much as the art world plays a huge role in his art, Sean’s background in engineering cannot be overlooked. His analytical side affects how he approaches a project, how he builds the layers into his work and how he solves problems along the way.