Singer-songwriter, Asha June was born to a Dutch father and Kenyan mother. She was as likely to hear Miriam Makeba as Dion Dimucci or The Supremes at home, “The options growing up in western Canada were pretty limited to AM radio or whatever Mum had on vinyl ” she jokes, adding her distinct vocal stylizing was, “likely as much due to the overabundance of country radio as it was to jazz.” 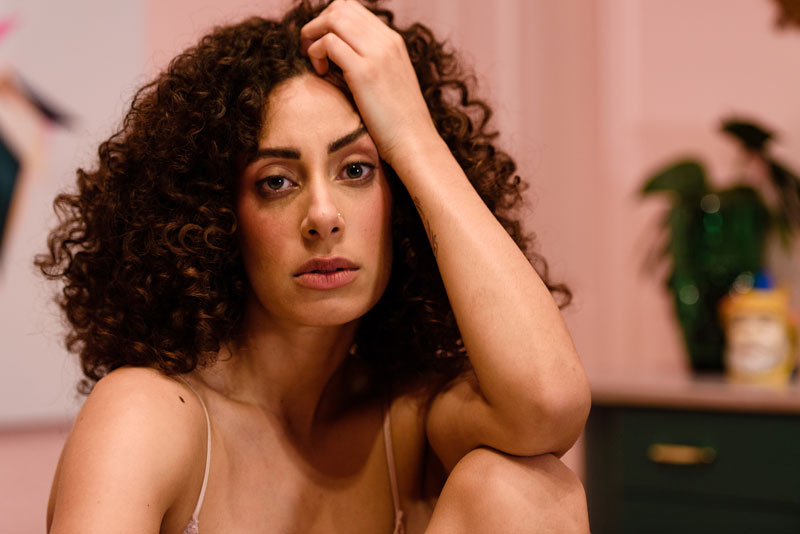 I’ve always loved music. My friends and I growing up would blast Andrew Lloyd Webber musicals, putting on elaborate re-stagings, enacting our favourite Disney songs, and at home, there was rarely a weekend without doing chores with Mum whilst singing along to Simon & Garfunkel or The Supremes playing from her old record player. There were singing lessons, and theatre camps, piano and violin, but I never truly saw it as a viable path. It wasn’t until, at my Uncle’s suggestion, I auditioned for a local college Music program.

The more I learned, the deeper I became entrenched, and the more impossible it became to divorce myself from that path. Music has been the thread weaving me through life. I can trace every moment from old song journals- my first crush, my greatest heartbreaks, my highs, lows, and all the moments in between. I think, like many artists, it’s not so much a choice, it’s a calling. It’s a symbiotic, at times toxically so, state of being.

What differs you and your sound from other rising singer-songwriters in the music industry?

With the advent of streaming, and the major advances in affordable home recording tech, I think there’s been a massive push for incredibly diverse artists, in terms of sound, aesthetic, approach. I think a lot of what pushes my songwriting/vocal styling, is the sort of balance between my academic studies and I guess the intuitive, or naturalistic tendencies by which I compose.

I’m heavily influenced by jazz, and take from that a very improvised approach to melody building or shaping. Having that theoretical knowledge is definitely helpful when it comes to refining the process- sort of like stream-of-consciousness in writing. Get all the feeling, the heart out. Then come back and edit.

I’ve always been drawn to the more alternative, slightly odd artists- those who push beyond the easily digestible and reveal something raw and human. That is what I try to achieve in my projects. I think the juxtaposition of passioned vocals and lyrics and slick, modern production would be what best distinguishes my sound.

Your latest release ‘Heart Shaped Box’ is out now. Please describe the creative process and inspiration behind the release?

So I’ve been a fan of Nirvana for many, many years. I remember buying their ultimate CD boxset, (yeah, THAT many years), with copies of lyric pages, notes, etc… and playing through the b-sides and studio cuts, over and over, until one of the discs basically burned in the player. There’s something about the maudlin lyrics with this sort of frantic energy that resonated with me, and so in the beginning drafting stages, I just jammed out on my keyboard until it hit the proper mood for me.

Whenever I do covers, I always approach it with, “If I wrote this song, how would I write it?”. After playing the progression, I experimented. Changed keys… then had the idea to modulate in the chorus. The contrast of major, lighter chords with the plaintive lyrics felt like a naturally sardonic play.

I always knew I wanted lush, layered background vocals, I’m a sucker for that old Motown chorus style, and an altered, sinister piano to contrast with the melody.

After that, it was a wonderful collaborative process with producer Jeremy Rompala- basically we had a quick zoom call, he had listened to the rough demo. We discussed feel, sound inspiration. Actually, there wasn’t much to discuss as we both wound up having the same sonic interpretation! That’s the greatest part of collaboration, honestly. It becomes this wonderful conversation through sound, without words getting in the way.

At this point, un-ironically, it would be my next release, “Here”. Most of what I’ve written to date has been either pushed by ‘heartbreak’, or kind of self-analysis. ‘Fade’, for example, (my previous release from last year), examined my frustrations with my career, the sense of working so hard at something, and feeling completely drained. ‘Run’, by contrast, was about motivating yourself when you’re in that headspace.

‘Here’ is the first time I’ve actually delved into a sort of optimistic neutrality. Sort of acknowledging that little kid we all have, that magical nature from childhood that becomes re-lit. It was a lovely reminder that you never have to look far to find it again.

I mean, surviving the pandemic was pretty amazing lol.

Seriously though, I think just having been working this long, and still working, and still loving music, and writing, and being able to express myself this way is the biggest ‘wow’ I could ask for. This industry is certainly not for the faint-hearted. There are many times I’ve wanted to hang up and quit. But the inspiration from all my amazing friends, mentors and fellow artists have always been such an incredible support, they make it easy to say no.

If you can do anything else, you probably should.

Look, the truth is, any career in the arts is incredibly difficult. It’s a very saturated market, and while the internet, technology and streaming services have made it more accessible, there is a huge, huge amount of wonderfully talented, better connected and just plain luckier artists. And that’s ok!

If you truly love music, and creating, then do it. Learn as much as you can. Explore different genres, learn about theory and harmony, learn at least one instrument. Save yourself from vocal nodes and learn proper singing technique. Get yourself a great support system. Seriously. There are many opportunists, and they will happily take advantage of their next meal ticket from even the whiff of vulnerability.

NEVER SIGN A CONTRACT WITHOUT HAVING YOUR LAWYER READ IT FIRST! Even the most successful artists have been messed about. Don’t mess with taxes. Get yourself an accountant. Do not depend on the adulation of strangers for your own self worth. I’ve never met you, and I promise you are wonderful and kind and 100% worth it.

Finally, you, and only you get to decide what success is. That could be anything from gigging in a wedding band, teaching music lessons, playing small acoustic sets at local pubs, or loading up a min-van with your mates and touring cross-country. It could also mean being signed, or joining an agency. And don’t forget to breath.

As things open up post-covid, I’m very excited to start playing venues again. We have a few more original releases planned for 2022, that will be a thrilling share! Also, stay tuned for a studio live-session TBA, and new merch designs to be launched.

Thank you very much for your time, and asking these thoughtful and provoking questions. I hope you all enjoy this cover as much as I did arranging it, and feel free to reach out to me via Instagram if you have any questions! See ya’ll soon on the other side of Spotify!

‘Heart-Shaped Box’ is available now via all major platforms.