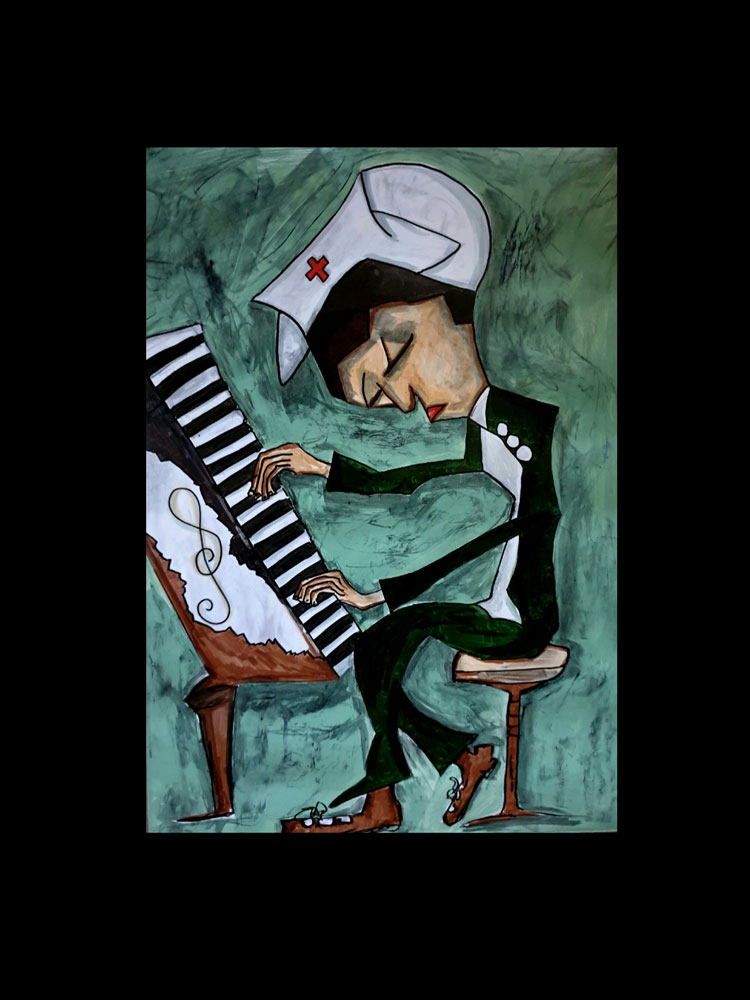 Doreen Jeglinski was born in Wolfen and grew up in Schadeleben, East Germany, officially known as the German Democratic Republic. After living in Schadelben she emigrated to Düsseldorf, at the age of 16, with her family. Art for Doreen is something that she has always enjoyed. Even from a young age she immersed herself in the arts. For Doreen, art is a powerful form of expression and so she her creative endeavours have never known any limits.

Initially Doreen worked mainly with charcoal pencils. Wanting to explore various media, she later discovered the colorful impact of acrylic paints. In the beginning she just experimented, playing with different forms and techniques. She was never really able to commit herself to a specific style. She is a very emotional artist, which she wanted reflected in her work. Over the last two years, she found her direction and voice as an artist.

Everything that concerns Doreen, which impacts and touches her, she has to express artistically. Fascinated by the work, Doreen immerses herself in her art, as she “steps into the story” while she paints it. Viewing herself as a perfectionist, Doreen’s work has to be clean and precise. The edges of the lines have to be shown cleanly, otherwise she feels dissatisfied. For Doreen this is what she refers to as the “fine tuning” process, where she puts the final touches into her work. Just as important to Doreen is the look of the face. Key to this is the expression that she puts into the subject’s eyes. She wants that emotion to be very clear, as it brings the work together and gives her painting a special quality. Once completed, she finally is able to let go of the work, leave her studio and enjoy the results of her art. Doreen knows the piece is completed once she feels a sense of satisfaction and joy with the expressiveness of the painting.

The inspiration for her work comes from very different places. If she sees colours on a wall that are extraordinary, or a word that intrigues her, then she feels the need to convert this into a work. Key to her art is the value of expressiveness that Doreen places and emphasizes in her creations. Upon completion of the piece, Doreen titles the piece – something that speaks to her based on the imagery that she has created. For Doreen she wants the viewer to immerse themselves deeply in the picture and merge with the work. She will often just sit back and look at the work for a period of time to ensure that everything fits.

Doreen did not study art; her development as an artist came naturally. She sees concepts everywhere, as such Doreen visualizes all of the creativity and colour selection without the need to pre-plan a piece. She believes that every person is an excellent artist, the key is to discover oneself. She views herself as the quiet Heinz Hentschel, whose art was piled up in his home in the city of Kevelear until he died. Then he was discovered and an exhibition was dedicated to him. She does not see herself as a great art connoisseur. Instead she creates art in her own extraordinary style. For Doreen complicated titles and the power to express them always challenges and calls her. She may not be a Kandinsky but she is a real Jeglinski.

Doreen’s modern figurative works can be seen on her Instagram page.